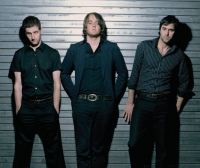 Pianist Tim Rice-Oxley and singer/keyboardist Tom Chaplin were childhood friends. Rice-Oxley's brother, also called Tom, was born in the same hospital at the same time as Tom Chaplin. Both attended Vinehall School in Robertsbridge, East Sussex (where Tom's father was the Headmaster for 25 years until 2002, and Tonbridge School in Kent. Rice-Oxley formed the band in 1995 with previous member Dominic Scott. Formerly "The Lotus Eaters", they changed their name when Chaplin joined the band in 1997 to Keane, after Cherry Keane, an older lady whom they knew when they were young (reportedly their dinner-lady at school). In an interview with The Irish Times on June 2, 2006, Rice-Oxley explained that the band had originally been named Coldplay, but had offered this name to a friend at college, one Chris Martin, as Rice-Oxley found it too depressing. It was thus ironic that Keane, in 2004, were labelled Coldplay imitators by their critics.

Keane began as a covers band, playing songs by U2, Oasis, and The Beatles, but soon wanted to perform their own material. The first Keane songs were composed by Rice-Oxley and Scott and were played in pubs around London, following their debut performance at the "Hope & Anchor" on July 13, 1998. In February 2000 they released their first single, "Call Me What You Like", of which 500 copies were produced and sold at the pubs where they played, and another single, "Wolf At The Door", limited to 50 copies, followed a year later.

Scott decided to leave the band in July 2001 due to the limited success that they were having. It was at this time that Rice-Oxley wrote the song "Everybody's Changing", about Scott's departure.

Keane were invited in 2002 by record producer James Sanger to his recording studio at Les Essarts, France, where they recorded a number of tracks, including "Bedshaped" and "This is the Last Time". It was here also that Rice-Oxley composed the song "Sunshine".

In December 2002, Simon Williams of Fierce Panda Records was asked by a mutual friend to attend a Keane gig at the Betsey Trotwood in London and was so impressed that he offered to issue the band's next single, "Everybody's Changing". Steve Lamacq heard the record and placed it as the single of the week on April 19, 2003.

After another single on Fierce Panda ("This Is The Last Time"), Keane signed to Island and released the single "Somewhere Only We Know", which reached number three on the UK Singles Chart in February 2004. Following the single's success, their debut album, Hopes and Fears, was released May 10, 2004, debuting at number one on the UK Albums Chart. The album went on to become the second-biggest selling album of the year in the UK, losing the top spot to Scissor Sisters on the final day of the year by only 502 copies. Currently the album has sold approximately five and a half million copies around the world.

The band won two awards at the 2005 Brit Awards ? Best British album for Hopes and Fears and the British breakthrough act award, as voted for by listeners of BBC Radio 1. In May 2005, Rice-Oxley received the Ivor Novello award for songwriter of the year.

The band are currently patrons of War Child. In September 2005 they contributed a cover of Elton John's "Goodbye Yellow Brick Road" to Help: a Day in the Life. Keane also did a cover of the Walker Brothers' "The Sun Ain't Gonna Shine (Anymore)" for the War Child website. The single was only released as a 7" vinyl.

The band gained some recognition in the United States in Autumn 2005 by opening some shows for U2; onstage they claimed Achtung Baby was one of their biggest influences. At this show, two new songs were played as well as their best-known material. They were also nominated for a Grammy in the Best New Artist category along with Sugarland, John Legend, Ciara, and Fall Out Boy at the 48th Annual Grammy awards in Los Angeles, on February 8, 2006. They lost the award to John Legend.

UNDER THE IRON SEA

Keane began recording for their second album, Under the Iron Sea, in April 2005, with producer Andy Green. Recording took place in Rye, East Sussex (where Hopes and Fears was recorded) and later in New York City. The band revealed the title of the album on March 14, 2006 through a handwritten note from the band posted on their official site.

The first two singles from the album were "Atlantic", a download-only music video, and lead single "Is It Any Wonder?", released on 29 May 2006, which reached number three on the UK Singles Chart. The album was released June 7 in Japan, June 9 in Netherlands, Germany, Mexico and Switzerland, June 12 in the UK and worldwide and was released June 20, 2006 in the USA and Canada. The album debuted at number one on the UK music charts.

The next single off the album will be "Crystal Ball", released on August 21. "Nothing In My Way" is likely to be a future single following its release.