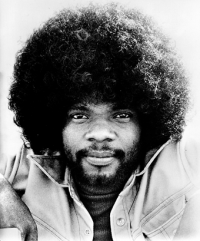 William Everett "Billy" Preston (September 2, 1946 – June 6, 2006) was an American musician whose work included R&B, rock, soul, funk and gospel. Preston became famous first as a session musician with artists including Little Richard, Sam Cooke, Ray Charles and the Beatles, and was later successful as a solo artist with hit pop singles including "Outa-Space", its sequel, "Space Race", "Will It Go Round in Circles" and "Nothing from Nothing", and a string of albums and guest appearances with Eric Clapton, the Red Hot Chili Peppers and others. In addition, Preston was co-author, with The Beach Boys' Dennis Wilson, of "You Are So Beautiful," recorded by Preston and later a #5 hit for Joe Cocker.