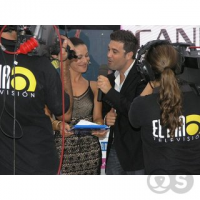 (1995) He was part of this duo for about 6 years. They recorded an album called

From 2002 to 2004 Xandro was part of the prestigious orchestra “Britannia”.

They performed at approximately 200 gala´s throughout Spain.

directed and realized by the prestigious producer and composer Chema Purón.

In late 2007 he recorded in Miami his most recent album “Desesperadamente”.

An album with beautiful songs, full of love and feelings. An album produced by Jose

musicians and composers worked on the production of this album: Juan Carlos Perez

Chayanne), Ricardo Martinez Lee Levin, Richard Bravo and among some others

producer Jose Luis Morin was the author of some of the songs of this album.

ground outside Spain. During his first visit he did several interviews for dutch

radiostations. In September 2008 he was support-act for Belle Perez which turned

out to be a big success.

European market. He is searching for new songs for his next album, an album that

will be more pointed to the European market.

In the meantime, on July 31 2009, Xandro participated in the prestigious "Festival de

150 songs participated and eventually 10 artists went to the final. Artists from the

of his songs like “Quien mas que tu"” of the album "Desesperadamente".

Recently he composed for other artists, for the Dutch singer Jody Bernal he wrote

the lyrics of "Dame tu veneno".

to be contracted for concerts in Europe.