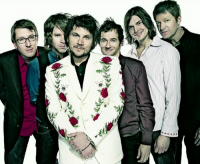 Primary songwriter/singer Jeff Tweedy was a member of the seminal 1980s and 1990s alt-country group Uncle Tupelo. Tweedy shared songwriting and singing duties with bandmate Jay Farrar, who later formed Son Volt. Tweedy formed Wilco with the last incarnation of Uncle Tupelo : drummer Ken Coomer, bassist John Stirratt, and string player Max Johnston. They had been featured on the last Uncle Tupelo recording "Anodyne". The band was named after the voice procedure term "Roger Wilco", an expression that means "Received, Will Comply". Jeff also once noted that when Jay Farrar left Uncle Tupelo, Jeff was left with nothing to do but comply. Hence, "Will comply - Wilco."

Wilco has steadily gained popularity since its first release A.M. in 1995, the only one of the band's albums that resembles the former Uncle Tupelo sound. Produced by Brian Paulson and lead guitar work done by Bottle Rockets' frontman Brian Henneman, A.M. reached #27 on the Billboard heatseeker chart; it would later place 34th on the Village Voice's Pazz & Jop Critics Poll for 1995. However, because A.M. was hastily recorded and released by Jeff Tweedy and most of the remaining members of Uncle Tupelo, it for the most part does not depart from the alt.country sound. This is why it is viewed by many as the least adventurous and original of the band's discography.

"Initially, it was just as lead guitar player," recalls Bennett, "I don't think I even mentioned that I played piano at all...I was a little intimidated by these guys at first...They had already had a sound that people really liked. But they also wanted to make pop records - A.M. was supposed to be a pop record, but it didn't really come across...When we did the second album Being There, I began to suggest parts on keyboards that weren't part of the song as originally written [on guitars and drums]. And once that happened, the door was just kicked open to another way of making a record."

When Wilco released the double album Being There, it won glowing reviews (it placed 14th on the Pazz & Jop Critics Poll for 1996) and a devoted group of fans, but average sales, reaching #73 on the Billboard album charts. The track "Outtasite (Outta Mind)" reached the mainstream and modern rock top 40 in 1997. Besides using country as a touchstone for their music Wilco made their classic rock influences on many tracks apparent including Stones-esque album closer "Dreamer in My Dreams". Wilco's experimental side also came out on two tracks; "Misunderstood" and "Sunken Treasure" which saw noise and more studio effects being added to their sound. It was during this time that Tweedy's lyrics began to become more abstract and introspective instead of being based on linear narratives like the songs "Box Full of Letters" and "Passenger Side" that appeared on A.M.

Johnston left the band soon after Being There and joined the Austin band The Gourds as a multi-instrumentalist. "When [Johnston later] left the band, the traditional Wilco role of 'other guy' became me," recalls Bennett.

During the spring of 1995, Woody Guthrie's daughter Nora had contacted English singer-songwriter Billy Bragg about writing music for a selection of completed Guthrie lyrics. Her father had left behind over a thousand sets of complete lyrics written between 1939 and 1967; none of these lyrics had any music other than a vague stylistic notation. Bragg would later approach Wilco, asking them to participate in the project as well. Wilco agreed, and in addition to recording with Bragg in Ireland, they were given their own share of songs to finish.

Rather than recreating tunes in Guthrie's style, Bragg and Wilco created new, contemporary music for the lyrics. What seemed like a risky enterprise surprised everyone; released in 1998 as Mermaid Avenue, the results were met with universal acclaim. The album got a Grammy nomination for Best Contemporary Folk Album, and went on to place fourth on the Pazz & Jop Critics Poll for 1998 (right behind Bob Dylan's Live 1966).

In 1999, the band released Summerteeth, showing a band evolving from country to electric rockers. Songs like "Can't Stand It" and "I'm Always in Love" demonstrated a buzzing shift in their sound. Reprise had higher expectations, but the album peaked at a disappointing #78 on the Billboard album charts. Regardless, it was still critically acclaimed and managed to place 8th on the Pazz & Jop Critics Poll for 1999. Summerteeth also represented a new focus on creating "studio sounds" that were added to the live tracking for effect. With later albums, Tweedy and Co.'s fascination with these studio sounds would continue to grow.

They returned to their country roots once more with the warmly-received Mermaid Avenue Vol. II, a sequel of sorts to the original project. Many of the tracks were leftover from the first Mermaid Avenue sessions, but Wilco also finished a few more songs, including "Someday Some Morning Sometime," which foreshadowed their next release. (Mermaid Avenue Vol. II would go on to place 32nd on Pazz & Jop's Critics Poll for 2000.)

The band's next album, Yankee Hotel Foxtrot, is considered by many in the music industry to be one of 2002's best albums, as well as a standout in terms of innovation. What started as an album continuing down the musical and sonic path set by Summerteeth morphed into a monster that would attract plenty of adulation and trouble.

Glenn Kotche replaced Coomer on drums (Coomer would later play with the band Swag), and brought a more musical and improvisational style of playing to the songs. Multi-instrumentalist Leroy Bach also joined so the band could better duplicate their complex arrangements live and in the studio.

The production seemed to go well, though serious rifts formed between Bennett and his bandmates. The situation came to a boil when Jim O'Rourke, formerly of Sonic Youth was asked to remix the album over Bennett's objections. Contrary to popular belief, O'Rourke actually stripped away some of the avant-garde noises recorded by Wilco rather than bring them up in the mix.

Bennett was not pleased with O'Rourke's involvement, and he was fired from the band shortly after completion of the album. (Bennett later began a project with longtime collaborator Edward Burch and released The Palace at 4 A.M. on the same day Yankee Hotel Foxtrot was ultimately released.)

The situation grew worse when Reprise Records, the band's label and a Warner subsidiary, rejected the album, sparking a long search to find a new home for the band. In the meantime, Wilco streamed the album from their website after purchasing the master tapes for $50,000. Ironically, the band ended up at Nonesuch Records, another Time Warner subsidiary, and the album was released in the spring of 2002.

When it was released, Yankee Hotel Foxtrot reached #12 on the Billboard album charts, Wilco's highest chart position to that date, as well as charting in Australia. Yankee Hotel Foxtrot would later go on to sell over 500,000 copies, and to date remains Wilco's best selling album.

Filmmaker Sam Jones, who photographed the cover art for Yankee Hotel Foxtrot, caught much of the YHF-era proceedings on film and from that material released the black-and-white documentary, I Am Trying to Break Your Heart. One pivotal scene involves an acidic argument between Tweedy and Bennett over the beginning of a song, "Heavy Metal Drummer", and ends in Tweedy running to the toilet to vomit (ostensibly due to the chronic migraines he has had since youth). The DVD release contains the movie, with a commentary by the director and the band, and a bonus disc containing extra footage and clips of live performances.

In 2003, Wilco teamed up with The Minus 5 (primarily Scott McCaughey and REM guitarist Peter Buck) to record Down With Wilco. The record, initially intended for release by a major label, was shelved (like Yankee Hotel Foxtrot) until it was picked up by Yep Roc Records.

A GHOST IS BORN

In early 2004, keyboardist Leroy Bach left the band, and Mikael Jorgensen replaced him at Wilco's important keyboards post. A Ghost is Born, Wilco's most recent studio album, was released on June 22, 2004, a date that was pushed back after Tweedy entered a rehabilitation facility for his addiction to his migraine painkillers, an event that also caused them to pull out of their headline slot at that year's Coachella Valley Music and Arts Festival in Indio, California. Shortly after the release of AGIB, the band gained two more members, acclaimed free jazz guitarist Nels Cline, and multi-instrumentalist Pat Sansone, previously a member of John Stirratt's side project, The Autumn Defense. Hailed by critics, A Ghost is Born was Wilco's first album to make the top ten of the US album charts in 2004, opening at #8, and also reached the top 50 of the Australian charts. A Ghost is Born won Wilco its first ever Grammy Awards in 2005 for Recording Package and Alternative Music Album. It also placed 13th on 2004's Pazz & Jop Critics Poll.

Released with full cooperation of the band soon after A Ghost is Born, The Wilco Book is a fan book of pictures of the band, their equipment, and interviews with the band, stage techs, and producer Jim O'Rourke on writing, recording, and performing music. There are also random pages of ephemera which fill out the pages in between the main sections (for instance, a rough thematic sketch of A Ghost is Born). The book itself reads like a record album, including an interlude consisting of an essay and paintings by artist Henry Miller. The essay "5 Songs" by writer Rick Moody traces Wilco's career by choosing one song from each full album (this essay was generally considered a fluff piece and has hurt Rick Moody's reputation since). A CD of early A Ghost is Born recordings is also included.

On November 15, 2005 the band released a live album entitled Kicking Television: Live in Chicago, recorded May 4-7, 2005 at the Vic Theater in Chicago, Illinois. It is the first Wilco album to feature the two newest members of the band, lead guitarist Nels Cline, and multi-instrumentalist Pat Sansone. Cline is a seasoned avant-jazz guitarist, and Sansone is a member of John Stirrat's band, The Autumn Defense. The album placed 89th in the 2005 Pazz & Jop critics poll.

On May 8, 2006, Glenn Kotche said that the band was in the writing and demoing stages of creating a new record, and that four or five of those songs had made it in to the band's recent live sets. The new songs include "On and On and On," "Is that the thanks I get/ We can make it better," "Walken," "Impossible Germany," "What Light," "Let's Fight," and "Either Way." Kotche also said that some of the new songs were written on the spot in the studio by the band as a whole, as opposed to Tweedy fleshing out the song and bringing it to the rest of the band.

In a June 2006 interview, guitarist Cline revealed that the band would be writing and demoing new songs in August, followed by recording sessions in November, with the new album tentatively scheduled for a Spring 2007 release.