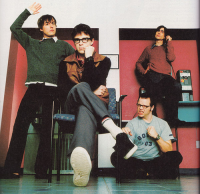 Weezer is an American alternative rock band. Formed on February 14, 1992, they have released five full length albums, an EP, a DVD, and a two-disc set, deluxe remastered edition of their debut album with the addition of b-sides and imports. Besides these official releases, they are notable for having released dozens and dozens of otherwise unreleased material onto the internet from their official website and having hundreds of songs which have never been heard by the listening public. Their latest album, entitled Make Believe, was released on May 10, 2005.

Five weeks after forming, they had their first gig, opening for Dogstar (featuring Keanu Reeves) at Raji's Bar and Ribshack on Hollywood Boulevard. Weezer began playing clubs to small audiences around L.A. and recording home-demos. Soon the band began to receive attention from various A&R reps, and were signed on June 25, 1993 by Todd Sullivan, an A&R rep from Geffen Records. The band was signed onto the DGC label (which later became Interscope).

The debut, Weezer, commonly referred to as The Blue Album, was released May 10, 1994. Weezer is also the name of their 2001 "comeback" album, better known as The Green Album. "Buddy Holly" and "Undone (The Sweater Song)" "Say It Ain't So" were released as singles. The album was produced by former Cars frontman Ric Ocasek, and much of that earlier band's influence can be heard on the record.

"Undone (The Sweater Song)" was released as the first single. Spike Jonze directed the music video produced for the track. It featured Weezer performing on a sound stage and documented various recording studio antics, with a pack of dogs eventually swarming the set.

Directed by Sophie Muller, "Say It Ain't So" did not capture the same success. It featured the bandmates playing hacky sack and performing the track.

The art on the album jacket is similar to the art on the Feelies' first album Crazy Rhythms, which can be counted as one of the work's major stylistic predecessors.

This album was also re-released and repackaged in 2004 as a Deluxe Edition which included a second disc of b-sides and other rarities that the band had yet to release on an officially released album.

In late December 1994, Weezer took a break from touring for the Christmas holidays. Cuomo traveled back east to his home state of Connecticut, and using an eight-track recorder, he began piecing together demo material for Weezer's next album. Cuomo's original concept for Weezer's sophomore effort was to be a space-themed rock opera, Songs from the Black Hole. The album would feature songs that flowed together seamlessly, and end with a special coda that briefly revisited the major musical elements of the piece. The band began demoing and working on Cuomo's concept through intermittent recording sessions in the spring and summer of 1995. Ultimately, the Songs from the Black Hole album concept was dropped, but many of the songs from the sessions were used on their second album.

After the multi-platinum success of their debut album, Weezer went back into the studio and recorded Pinkerton. The album was loosely based off of an opera that involved a boy drafted in a war and being sent to Japan, where he meets a girl. He has to leave Japan suddenly and promises that he'll return, but his departure breaks her heart.

The album was finally released on September 24, 1996. Pinkerton, which peaked at #19 in the U.S. upon its release, didn't sell as many copies as its predecessor, probably due to its darker, more abrasive nature. Pinkerton was labelled "one of the worst albums of 1996" by Rolling Stone. Eventually, the album grew into a cult classic, and is now commonly viewed as the best Weezer album yet. Unfortunately, Rivers was disillusioned with its initial failure, which led to his decision to break up Weezer after this release.

Weezer completed their touring for Pinkerton in the summer of 1997. The members of the band took a break, with drummer Patrick Wilson returning to his home in Portland, Oregon to work on his side project, The Special Goodness, Matt Sharp left to complete the follow-up album for his group The Rentals, and Brian Bell went to work on his group, Space Twins.

Rivers Cuomo returned to Boston, Massachusetts, but dropped out of Harvard to focus on songwriting. He formed a solo group, The Rivers Cuomo Band. Cuomo used the group to try out songs intended for the next Weezer album and also to showcase songs written by Rivers however never recorded by Weezer. The band played their first show at T.T. the Bear's on October 8, 1997. Future Weezer bassist Mikey Welsh was part of the solo band's line-up. The Boston songs were later abandoned and not used on the next Weezer album, but live recordings of the Boston shows are openly traded on the internet. In February of 1998, Rivers left Boston and Harvard academia behind and returned to Los Angeles.

Pat Wilson and Brian Bell joined Cuomo in L.A. to start work on the next album. Matt Sharp did not rejoin the band and officially left the group in April of 1998. The group decided on Mikey Welsh as Sharp's replacement. Weezer continued rehearsal and cut demos until the fall of 1998. Frustration and creative disagreements led to a decline in rehearsals, and in late fall of 1998, drummer Pat Wilson left for his home in Portland pending renewed productivity from Cuomo.

The band would not reunite until April of 2000, when the Fuji Festival in Japan offered Weezer a high-paying gig to play in August 2000. The festival served as a catalyst for Weezer's productivity, and from April to May, 2000, the band rehearsed and demoed new songs in Los Angeles. The band returned to live shows in June 2000, but without the Weezer name. Instead the shows featured the group's first use of the pseudonym Goat Punishment.

On June 23, 2000, the band, now back under the Weezer name, joined the Warped Tour for eight planned dates. Weezer were well-received at the festival, leading them to book more tour dates for the summer.

In the summer of 2000, Weezer (now consisting of Rivers Cuomo, Mikey Welsh, Pat Wilson, and Brian Bell) were back on the road. Weezer's setlist consisted of 14 new songs, but 13 of them were later scrapped and replaced with what was to become Weezer. Fans labeled these songs the Summer Songs of 2000 (commonly abbreviated, SS2k), and are all fan-favorites. Three SS2k songs, "Hash Pipe", "Dope Nose" and "Slob," were recorded properly for studio albums (with "Hash Pipe" appearing on the Green Album and "Dope Nose" and "Slob" appearing on Maladroit).

Eventually, the band went back into the studio to produce a third album. Weezer (2001) chose to repeat the self-titled name of their first release. This album quickly became known as The Green Album due to its distinctive bright green coloring. Shortly after the release of The Green Album, Weezer went on another American tour, attracting many new fans along the way due to the strength of hit singles "Hash Pipe" and "Island In The Sun", both of which had videos that received regular rotation on MTV.

Much to the ire of their recording label, Weezer decided to forgo the industry-preferred waiting period of 2 to 3 years between albums, and soon began recording demos for their fourth album. The band took a experimental approach for the recording process by allowing fans to download the demos from their official website in return for feedback. After the release of the album, the band subsequently stated that the process was somewhat of a failure, as the fans did not supply them with cohesive constructive advice. Only the song "Slob" was included on the album due to general fan advice.

As reported on August 16th, 2001, by MTV, bassist Mikey Welsh was checked into a psychiatric hospital. His whereabouts were previously unknown, as he mysteriously went missing before their second filming of the "Island in the Sun" music video, featuring the band with various animals. Weezer was prompted to find a temporary replacement for Welsh. Through a mutual friend, Cuomo received Scott Shriner's number and asked if he was interested to fill in for Welsh. Shriner, at first believing it was a prank phone call, accepted.

The fourth album, Maladroit, was released in 2002 (see 2002 in music) with Scott Shriner replacing Mikey Welsh on the bass, and served as a harder-edged version of their trademark catchy pop-influenced music. Although met with generally positive critic review, its sales were not as strong as The Green Album. As soon as Maladroit had wrapped up, the band immediately began work on their fifth album, recording numerous demos between tours for Maladroit (often recording as many as 24 songs in a day). These songs were eventually scrapped and Weezer took a well-earned break after their one-two punch of The Green Album and Maladroit.

From December 2003 to the summer and early fall of 2004, the members of Weezer recorded a large amount of material intended for a new album to be released in the spring of 2005 with producer Rick Rubin. That album, entitled Make Believe, was released on May 10, 2005. The album's first single, "Beverly Hills," became a hit in the U.S., staying on the charts many months after its release.

In September 2005, Weezer set out on a tour with the Foo Fighters, which, to many, is simply called Foozer.

The tour for Make Believe can be considered a turning point for the band, who appear to be having much fun. Rivers began the tour appearing shy and moving very little whilst playing songs, however at this point in the tour he appears to have much more confidence than before. The band appear tighter than ever before in 2005, and apparantly consider this tour the best they have ever had.

The band is currently on break from touring and promotion as Rivers Cuomo is currently attending Harvard University to complete his degree in English Literature. There is no definitive evidence that the future of the band is in question.

"It's not going to be entirely quiet on the Weezer 'hood not by a long shot," a posting on the bands official site reads. "Everyone is planning on writing music and indeed a good deal of the songs have already been created while the band was still on tour this fall. Rivers returns to college this spring and everyone... continues to work towards a musical future... Only time will tell when the Weezer machine will get back into full gear". The band's official FAQ site, states as "(2/06) we have no idea, except to say that its nearly impossible that there could be a new studio album before '07. Before then there may be other releases though, time will tell". "Karl's money is on an eventual 6th album" and this is very likely as the band is under contract for at least 2 more albums.

A live DVD comprising of footage from the current Japan tour is scheduled for release in 2006. It will consist of a 2-day, 7-camera shoot of the shows in Japan, plus material that will be drawn from various behind-the-scenes footage .

As of January, 2006, Bell and Wilson are set to portray Velvet Underground members Lou Reed and John Cale in Factory Girl, an upcoming film about the life of Andy Warhol cohort Edie Sedgwick.

Rivers Cuomo announced a new song called "Piece of the Pie" while onstage during the band's October 7th, 2005 show in Detroit (but did not perform it). Cuomo has mentioned other song ideas recently, dropping titles and ideas such as "East Coast or West Coast," "Pig" and new songs with lyrics he described as "bloggy"

"My Name is Jonas" was released to radio as a promo single in Canada before the release of "Say It Ain't So".

"Pink Triangle" was released as a radio promo in the US.

"Photograph" was released to Japan instead of "Hash Pipe" and then to radio in the US.