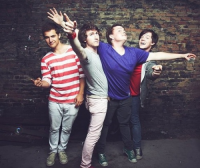 Walk the Moon (stylized as WALK THE MOON) is an indie rock band based in Cincinnati, Ohio. Lead singer Nicholas Petricca started the band in 2008 and went through several member changes before finally coming together with current members, Kevin Ray, Sean Waugaman, and Eli Maiman sometime in 2010. The band derives their name from the song "Walking on the Moon" by The Police. The group independently released their debut album, i want! i want!, in November 2010, receiving airplay for the track "Anna Sun" on WCRD, WFPK, WKNH, WRLT, and WTMD. In February 2011, Walk the Moon signed with Mick Management. They signed to RCA Records and released their first official album, Walk the Moon in June 2012. Their self-titled debut is composed of many of their original tracks from i want! i want! in addition to new tracks that were written specifically for the album and were meant to reflect the kind of energy the band produced in their live shows.