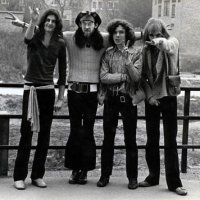 Van der Graaf Generator are an English progressive rock band, formed in 1967 in Manchester by singer-songwriter Peter Hammill and Chris Judge Smith and were the first act signed to Charisma Records. They did not experience much commercial success in the UK, but became considerably popular in Italy during the 1970s. In 2005 they embarked on a reunion, which continues to the present day.