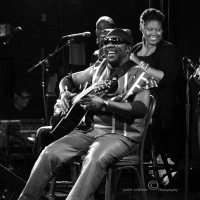 Toots and the Maytals, originally called simply The Maytals, are a Jamaican musical group and one of the best known ska and rock steady vocal groups. According to Sandra Brennan at Allmusic, "The Maytals were key figures in reggae music. Formed in the early 1960s when ska was hot, the Maytals had a reputation for having strong, well-blended voices and a seldom-rivaled passion for their music. Frontman Hibbert's soulful style led him to be compared to Otis Redding.