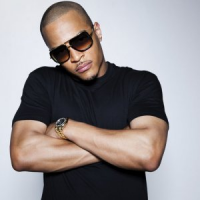 Clifford Joseph Harris Jr., (born September 25, 1980),better known by his stage name T.I., and also by his alter ego T.I.P., is an American rapper, songwriter, producer, actor, philanthropist and co-CEO of Grand Hustle Records. As of October 2008, T.I. has had nine Top 10 Billboard Hot 100 singles, with 3 of them reaching number 1 (\"My Love\" with Justin Timberlake, \"Whatever You Like,\" & \"Live Your Life\" featuring Rihanna).

T.I. is from Bankhead, Atlanta, Georgia. He was nicknamed \"Tip\" after his paternal great-grandfather.[4] Upon signing with Arista Records subsidiary LaFace Records in 2001, he shortened his name to T.I. out of respect for label mate Q-Tip.

His debut album I\'m Serious was released on October 9, 2001 through Arista Records, which spawned the single of the same title which featured reggae vocalist Beenie Man. His debut album included Pharrell of The Neptunes (who named him the Jay-Z of the south), Jazze Pha, and Youngbloodz. Production was by The Neptunes, DJ Toomp, Madvac, and The Grand Hustle Team. However, the album did not sell very well, and he was dropped from the label.

T.I. released the first single \"I\'m Serious\" with Beenie Man. The single had little airplay and failed to chart. The label would not release another single or video for the album, so T.I. created a video for \"Dope Boyz\", which had not a video nor single released, but can be seen on YouTube.

He released several mixtapes with the assistance of DJ Drama, which created an underground buzz. He resurfaced in the summer of 2003 on Bone Crusher\'s song \"Neva Scared\".

T.I. released Trap Muzik in the summer 2003 through Grand Hustle Records and debuted at number four and sold 109,000 copies in its first week. It spawned the singles \"24s\", \"Be Easy\", \"Rubberband Man\", and \"Let\'s Get Away\". The album featured guest appearances by Eightball & MJG, Jazze Pha, Bun B and Macboney and producers include Jazze Pha, Kanye West, David Banner, Madvac and DJ Toomp. The success of the album was followed by some controversy; while on tour, T.I. was charged with violating his probation over a 2003 drug charge, and turned himself in. He was sentenced to three years in prison. While there, he was granted rights to film the music video for \"Let\'s Get Away\". It sold over 1 million copies in the U.S. and was certified Platinum by the RIAA.

His fourth album, King debuted at number one on the Billboard 200 chart in the first half of 2006, selling 522,000 copies in its first week. T.I. released his promo-singles \"Front Back\" and \"Ride with Me\" before the album\'s release date. The singles had small attention, but it helped promote the album and his debut movie ATL. The album also included other singles, \"What You Know,\" \"Why You Wanna,\" \"Live in the Sky,\" and a remix of \"Top Back.\" King earned numerous awards and nominations including a Grammy Award nomination for Best Rap Album.

\"What You Know\" won a \"Best Rap Solo Performance\" and was nominated for Best Rap Song at the 49th Grammy Awards.

T.I. vs. T.I.P. sold 468,000 copies in the United States, according to Nielsen SoundScan, and debuted at number one on the Billboard 200 and the Top R&B/Hip-Hop Albums chart. The Grand Hustle/Atlantic set is T.I.\'s second chart-topper in the past year-and-a-half; King opened at number one on the Billboard 200 with 522,000 copies in late March 2006. The album included guests by Jay-Z, Busta Rhymes, Wyclef Jean, Nelly, and Eminem with productions by Eminem, Jeff Bass, Mannie Fresh, Grand Hustle, The Runners, Just Blaze, Wyclef Jean and Danja. This is his first album without production by long time producer DJ Toomp.

T.I. released his sixth album Paper Trail on September 30, 2008. The title of the album refers to the lyrics he had written down on paper. Like many other rappers, T.I. abandoned this style of rapping after his debut album I\'m Serious by just memorizing lyrics. \"He wanted to take more time to really put something down (this time),\" explained his rep. The album debuted at number one on the Billboard 200 selling 568,000 copies in the United States.

The first promo single off of the album, \"No Matter What,\" was released on April 29, 2008. The music video was released on June 27 on MTV\'s FN Premieres. The second promo single was \"Swing Ya Rag\" which was produced by and featured Swizz Beatz.The first main single off the album \"Whatever You Like,\" was released on July 29, and became his most successful single of his career so far, breaking the record for the highest jump to number one on the Billboard Hot 100, jumping from #71 to #1. It is T.I.\'s first solo number one on the chart. The subsequent single \"Live Your Life\" featuring Rihanna, T.I. broke his own record on the Billboard Hot 100 when it jumped from #80 to the #1 spot.