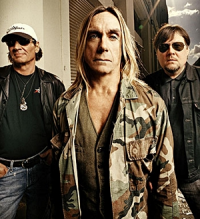 The Stooges, also known as Iggy and The Stooges, are an American rock band from Ann Arbor, Michigan, first active from 1967 to 1974, and later reformed in 2003. Although they sold few records in their original incarnation, and often performed for indifferent or hostile audiences, the Stooges are widely regarded as instrumental in the rise of punk rock, as well as influential to alternative rock, heavy metal and rock music at large. The Stooges were inducted into the Rock and Roll Hall of Fame in 2010. In 2004, Rolling Stone ranked them 78th on their list of the 100 greatest artists of all time.