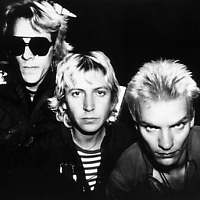 The Police was a three-piece British Rock band, which was strongly influenced by ska and reggae. Coming to prominence in the wake of the punk rock phenomenon, they rose to become one of the most popular groups in the world in the early 1980s.

In May, ex-Gong musician Mike Howlett invited Sting and guitarist Andy Summers to form Strontium 90 with him, as a project band for a Gong reunion. The drummer Howlett had in mind for this band, Chris Cutler, was unavailable to play drums, so Sting brought along Stewart Copeland.

Strontium 90 recorded several demo tracks at Virtual Earth Studios, and then performed at a Gong reunion concert in Paris on May 28, 1977. An album with some of these studio and live tracks (with a very early incarnation of "Every Little Thing She Does Is Magic") was released in 1997 under the name "Police Academy". The foursome also performed at a London club as "The Elevators" in July, 1977.

In July, 1977, Copeland, Sting, Padovani, and Summers began performing as a four-piece version of The Police. Padovani's relatively limited ability as a guitarist meant that his tenure in the band was short, and soon after an aborted recording session with producer John Cale on August 10, Padovani left the band and Summers took over sole guitar duties. Summers was several years older than Copeland and Sting and his experience as a guitarist went back to the early 1960s and included a stint in Eric Burdon's New Animals in the late '60s. This lineup of Copeland, Sting, and Summers would endure for the rest of Police history.

Sting proved to be a capable songwriter; he had previously spent time as a secondary school English teacher, and his lyrics are noted for their literary awareness and verbal agility. Material in the later album Ghost In The Machine was inspired by the writings of Arthur Koestler, and material in Synchronicity was prominently inspired by the writings of Carl Jung. "Tea in the Sahara" on the latter album showed interest in Paul Bowles as well.

The Police, along with The Clash, are notable as one of the first mainstream white groups to adopt ska and reggae as predominant musical forms and to score major international hits with ska and reggae-styled material. Although ska and reggae were already very popular in the United Kingdom (due to the large number of Caribbean immigrants) the style was little known in the United States or other countries, and prior to the emergence of the Police only a handful of reggae songs?e.g. Eric Clapton's 1974 cover rendition of Bob Marley's "I Shot the Sheriff" ? had enjoyed any significant chart success. Desmond Dekker, a ska artist, also flirted with international chart success for songs "Israelites" and "007."

The bleached blonde hair that would become a trademark was a happy accident occurring before they cut their first album. The band, desperate for money, was asked to do a commercial for Wrigley's Spearmint chewing gum on the condition that they dye their hair blonde.

For the Police, their first album, Outlandos d'Amour was a hardship, working on a small budget, with no manager or record deal. Stewart Copeland's older brother Miles Copeland III heard "Roxanne" for the first time and immediately got them a record deal with A&M Records. The single was re-released in 1979, and it was then that the Police achieved widespread fame in the United Kingdom, as well as scoring a minor hit with the song in several other countries, notably Australia. Their success led to a gig at the infamous New York club CBGB and a grueling United States tour in which the band drove themselves and all their equipment around the country in a Ford Econoline van.

As with several other international acts of this period (e.g. Blondie), and like Nirvana a decade later, The Police gained early popularity in Australia through their first Australian tour, and they scored some of their first international hits in Australia, well before most other countries. The key factor in their early Australian breakthrough was that they were enthusiastically supported by Australia's only non-commercial rock radio station, Triple J in Sydney, which in turn led to early exposure for their music videos on the popular national pop show Countdown.

In October 1979, the group released their second album Reggatta de Blanc, which was a major seller in many countries and which spawned UK singles "Message In A Bottle" their first No 1 and "Walking On The Moon" also a chart topper. The instrumental title track would win the Grammy for Best Rock Instrumental Performance.

In March 1980, the Police decided to embark on their first world tour, and they were one of the first major rock bands to play in places like Bombay, India and Egypt. The Police toured the world long before they were a world class act. The much generated hype of their new music and tour caused an outbreak of popularity among new wave devotees across the rest of the world.

In May A & M released "Six Pack" an expensive package containing the 5 previous A & M singles (i.e not including "Fall Out") in their original sleeves plus popular album track (from "Regatta De Blanc") "The Bed's Too Big Without You". It reached no 17 in the UK singles chart although chart regulations introduced later in the decade would have classed it as an album.

Pressured by their record company for a new record and a prompt return to touring by fall's end, the Police quickly released their third album, Zenyatta Mondatta in the fall of 1980. The album gave the group their third UK number one hit, "Don't Stand So Close to Me", and "De Do Do Do, De Da Da Da", which charted successfully in the United States. Mondatta gave the Police worldwide fame. In subsequent interviews, Sting himself expressed some disappointment with the album, regretting the rushed nature of its recording. However, many critics would later cite it as one of their strongest efforts. It was however the last album in which the group collectively cooperated, or as Sting would later put it, the last album they worked on "as a band". The instrumental song, "Behind My Camel," written by Andy Summers, would win the Grammy for Best Rock Instrumental Performance. The song "Don't Stand So Close To Me" would win the Grammy for Best Rock Vocal Performance For Duo Or Group.

By this time Sting was becoming a major star in his own right, and he was clearly intent on establishing a career beyond the confines of the Police. He branched out into acting with fair success, making a well-received debut as 'The Ace Face' in the film version of The Who's rock opera Quadrophenia. This was followed with a role as the mysterious visitor in the Richard Loncraine film version of Dennis Potter's play Brimstone and Treacle, as well as scoring a minor solo hit in the United Kingdom with the movie's theme song, "Spread A Little Happiness". As Sting's fame rose, he began to exert more control over the group, aided by the fact that he wrote the bulk of their material. His relationship with band founder Stewart Copeland began to deteriorate, with the two reputedly coming to blows on some occasions. The increasingly strained partnership was further stretched by the attendant pressures of worldwide fame, conflicting egos, money, and publicity.

The Police's fourth album, Ghost In The Machine, produced by Hugh Padgham, was released in 1981. It featured thicker sounds, layered saxophones, and vocal textures, spawning the hit singles, "Every Little Thing She Does Is Magic", "Invisible Sun", and "Spirits In The Material World".

The Police released their last album, Synchronicity, in 1983; it is widely regarded as a classic. Notable songs from that album include "Every Breath You Take", "Wrapped Around Your Finger", "King of Pain" and the foreboding "Synchronicity II". Except for "King of Pain", the singles were accompanied by memorable music videos directed by Godley & Creme. This album hit #1 in both the U.K. (where it debuted at #1) and the U.S. It stayed at #1 in the U.K. for only two weeks and in the U.S. for 17 weeks. The album that ended its run at U.S. #1 was Quiet Riot's Metal Health. It was nominated for the Album of the Year Grammy, but lost to the inevitable winner, Michael Jackson's Thriller. The Police, though, beat out Jackson in one category: "Every Breath You Take" won the Grammy for Song Of The Year, beating Michael Jackson's "Billie Jean" in that category. "Every Breath You Take" also won the Grammy for Best Pop Performance By A Duo Or Group With Vocal. Synchronicity II would also win the Grammy for Best Rock Performance By A Duo Or Group With Vocal.Every Breath You Take would also win the American Video Award for Best Group video and it would also nab the Ivor Novello Awards for the categories Best Song Musically & Lyrically and Most Performed Work.

Although there was never an official break-up, each band member pursued his own solo career after the Synchronicity tour ended in March 1984. In June 1986 they reconvened to play three concerts for the Amnesty International A Conspiracy of Hope Tour. In July of that year, a tense short-lived reunion in the studio produced only subdued re-recordings of "Don't Stand So Close to Me" and "De Do Do Do, De Da Da Da" (the former was released on the compilation Every Breath You Take: The Singles). By this time, it was clear that Sting had no intention of continuing with the band, having already released a successful solo debut LP in 1985, the jazz-influenced The Dream of the Blue Turtles.

In 1992, Sting wed Trudie Styler. Summers and Copeland were invited to the ceremony and reception. Aware that all band members were present, the wedding guests pressured the trio into playing, ultimately performing "Roxanne" and "Message In A Bottle". Copeland said later that "after about three minutes, it became 'the thing' again."

On March 10, 2003, the Police were inducted into the Rock and Roll Hall of Fame and performed "Roxanne", "Message In a Bottle", and "Every Breath You Take" live, as a group. The latter song was performed alongside Steven Tyler, Gwen Stefani, and John Mayer. Towards the end of the song, Copeland was playing the drums so hard that the head of his snare drum broke.

In 2004, Henry Padovani (the band's guitarist before Andy Summers joined) released an album with the participation of Stewart Copeland and Sting in one track, reuniting the "original" Police members in a performance for the first time since 1977.

In 2006 Stewart Copeland made a rockumentary about the band called Everyone Stares: The Police Inside Out, based on Super-8 filming he did when the band was touring and recording in the late 70's and the early 80's.

1993 - Message in a Box: The Complete Recordings

2001 - Live Ghost In The Machine (only released in Japan)

2003 - Every Breath You Take: The DVD ( compilation of video clips as well as some live material and a rockumentary about the making of Ghost in the Machine)

2006 - Everyone Stares: The Police Inside Out (rockumentary film made by Stewart Copeland)

1984 - "Wrapped Around Your Finger" - Synchronicity