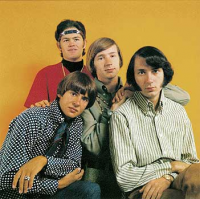 The Monkees are an American–British pop group that released music under their original incarnation between 1966 and 1970, with subsequent reunion albums and tours in the decades that followed. Assembled in Los Angeles in 1965 by Robert "Bob" Rafelson and Bert Schneider for the American television series The Monkees, which aired from 1966–1968, the musical acting quartet was composed of Americans Micky Dolenz, Michael Nesmith, and Peter Tork, and Englishman Davy Jones. The band's music was initially supervised by producer Don Kirshner.