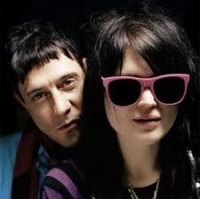 The Kills are an alternative rock band formed by American singer Alison Mosshart ("VV") and British guitarist Jamie Hince ("Hotel"). Their first three albums, Keep On Your Mean Side, No Wow, and Midnight Boom, have garnered much critical praise. Blood Pressures, their fourth and most recent studio album, was released on April 4, 2011, worldwide and April 5, 2011, in the United States.