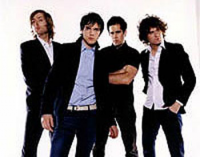 The Killers is a synth rock band from Las Vegas, Nevada, who formed in 2002. The band is comprised of Brandon Flowers (vocals, synthesizer), Dave Keuning (guitar), Mark Stoermer (bass), and Ronnie Vannucci Jr. (drums and vocals). They released their hit record Hot Fuss in 2004.

In 2001, Brandon Flowers was abandoned by the first band that he was in, a synth pop band known as Blush Response, after he declined to move with the rest of them to Los Angeles, California. After the split, Flowers responded to an ad in the Las Vegas Weekly by future guitarist David Keuning, about forming a band which was inspired by bands such as Oasis, The Cure, New Order, and The Smiths. They met and immediately clicked, and set out to find a drummer and a bassist. (The first bassist was Dave's room mate and the first drummer would later sue the band, claiming that he wrote "Mr. Brightside".) After a few shows, they found Ronnie Vannucci and Mark Stoermer to fill the posts.

The band came up with the idea for their name from a New Order video titled "Crystal". It was featured on the bass drum of a fictional band in the video (although The Killers in the New Order video "Crystal" included males and a female). Brandon Flowers went on to take to the stage at the 2005 T in the Park festival and perform "Crystal" with New Order.

Before they had become a band, all four of them had various jobs. Flowers, who had dropped out of college, was a bellhop for a while at the Gold Coast Hotel. David Keuning, who was originally from Pella, Iowa and had dropped out of Kirkwood Community College and then the University of Iowa, and moved to Las Vegas in January of 2000, worked at a Banana Republic store; Mark Stoermer worked as a medical courier delivering various medical supplies and was a student of philosophy at UNLV; Ronnie Vannucci was a student of classical percussion at UNLV and worked as a photographer at the Little Chapel of Flowers and as a pedicab driver at the Desert Passage mall inside the Aladdin Hotel.

UK magazine NME was an early champion of the band - reviewing early UK shows. The band became more well-known when they released their album Hot Fuss on June 7, 2004 in the United Kingdom (on London-based indie record label Lizard King Records) and June 15 in the United States on Island Records. They released their Japanese and French versions of the same album in late 2004. Their first single, "Somebody Told Me," was released on that same year. The band also had chart success with their singles "Mr. Brightside", which reached the Top 10 in the UK when released, and "All These Things That I've Done". The main bulk of their mainstream success came when they scored a number three chart position with their re-release of "Somebody Told Me". Such success spawned feuds with The Bravery and Fall Out Boy, both fellow label-mates for Island Records (see Controversy below).

Much of The Killers' music is based on British influences and on the music of the 1980s, particularly New Wave music. Brandon Flowers has also said in interviews that the larger than life sound of many of the band's songs is due to the influence of living in Las Vegas, a city where everything is about flash and who can top who. Despite their appreciation for the wave of post-punk bands that sprung up during the 80s, the band members are also avowed fans of David Bowie, Morrissey, Queen and U2, and the influence of these bands can easily be felt in some of their songs. Brandon Flowers occasionally sings with a faux British accent.

On December 1, 2004 they appeared as guests on Late Night with Conan O'Brien and on December 2, 2004, they made a guest appearance on the FOX television series The O.C.. On January 15, 2005 they were the musical guest on Saturday Night Live. In the past, they have appeared as musical guests on: Jimmy Kimmel Live, Pepsi Smash, The Late Show with David Letterman, and in Britain they have appeared on Friday Night with Jonathan Ross and Later with Jools Holland. Most recently, on April 14, 2005, they appeared on The Tonight Show with Jay Leno. On May 12, 2005 and October 10, 2005, they performed throughout MTV Presents: The Next Generation Xbox Revealed. They performed for an episode of Austin City Limits that aired on November 5, 2005.

The Killers performed at the 2005 Glastonbury Festival on the Pyramid Stage, on Friday Night, after they turned down the Sunday headline spot when Kylie Minogue canceled after being diagnosed with breast cancer. They turned down the offer, stating that they didn't think they had enough songs to fill a headline slot. However, they attracted one of the biggest crowds at the festival. They also performed at the T in the Park festival in Balado, Scotland on July 9, 2005, during which, following The Killers' own set, Brandon Flowers performed "Crystal" with New Order "Crystal" being the music video the band took their name from. Soon, they were jetting off to Vienna with U2, in order to support them on the European leg of their current Vertigo Tour.

The Killers performed on the London stage of the Live 8 concert on July 2, 2005. They performed their song "All These Things That I've Done". To their surprise, Robbie Williams (who performed after them) incorporated the song's refrain "I've got soul but I'm not a soldier" into his own performance.

After seeing footage for director Richard Kelly's upcoming film Southland Tales, the band agreed to allow Kelly to use "All These Things I've Done" for the movie's soundtrack. The song was also used in the final scene and closing credits of the 2005 movie, The Matador.

The Killers' second album, "Sam's Town", was released on October 2nd 2006 in the UK, and October 3rd 2006 in the USA under Lizard King again. Brandon Flowers quoted that Sam's Town will ""be the best album in the past twenty years". The first single from Sam's Town "When You Were Young" debuted on radio stations in late July 2006. In late August 2006, it was offered as a downloadable track before the album's debut. The single then entered the chart on downloads alone at #5 and the following week on its official release went to #2 in the UK. It was unable to knock the Scissor Sisters off of the top spot. Their next single, "Bones", is due to be released later this year.

In promotion of Sam's Town, the band returned as the musical guest for the thirty-first season premiere of Saturday Night Live on September 30, 2006. They performed "When You Were Young" and "Bones."

The Killers have signed on to play the Big Day Out festival in Australia and New Zealand in 2007, playing 6 dates from January 19 to Februrary 4. They are billed alongside Tool, Muse, My Chemical Romance, and Jet.

The album sold over 700,000 copies worldwide in the first week of release, with a No. 2 debut on the United World chart.

Since going platinum, the band (and principally Flowers) has managed to incite a few rivalries - most notably with The Bravery and Fall Out Boy, which, ironically, are both labelmates (Island Records). Flowers has said that these bands, especially The Bravery, are riding on the coattails of the success of The Killers. However, it has been speculated that it was a publicity stunt to create momentum for The Bravery's self-titled debut album. Additionally, in an article of NME, Flowers claimed Fall Out Boy was hogging the A&R man both bands share, setting off their bassist Pete Wentz. However, after Wentz made a couple of rants on his blog in September of 2005, he offered a virtual cease-fire.

Brandon Flowers, in interviews with several music magazines, claimed that the song "Where Is She?" was based on Jodi Jones, a Scottish girl whose boyfriend, Luke Mitchell, was found guilty of her murder. Many, especially in Scotland, saw this as an insult to her memory, and Flowers (speaking for the band) gave a formal apology, telling the Sunday Herald, "I came across kind of badly. I'd hate to cause offence or further hurt because of it...There's no way on earth I could ever possibly pretend to know what it must actually feel like to suffer such a thing, and I wouldn't presume to appropriate any other individual's feelings for a song."

In February 2006 The Killers' former manager, Braden Merrick, filed a lawsuit alleging breach of contract when he was fired in May of 2005. Merrick's contract was to have run through 2007 and the two sides had been negotiating a settlement before the lawsuit was filed.

Flowers has recently gone on record claiming that Green Day's politically driven concept album American Idiot displays "calculated Anti-Americanism." He explained that he has problems with the album content itself and also the fact that the band's recent live DVD, Bullet in a Bible, was filmed overseas. Stating that he feels Green Day's DVD is a bit of a stunt, he went on to say that he feels The Killers' most recent release, Sam's Town, is a much more accurate representation of American culture.