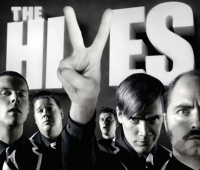 In 1995 they were signed by Peter Ahlqvist to Sidekick records, a subsidiary of the Swedish skate punk record label Burning Heart Records. The following year they released their debut EP Oh Lord! When? How? Ahlqvist decided to promote the band to Burning Heart.

1997 saw the release of The Hives debut album "Barely Legal" (an early stage name of Vigilante's), and they began touring. The following year they released their second EP "a.k.a I-D-I-O-T".

After a two-year break The Hives returned with a new album entitled "Veni Vidi Vicious" which saw the band move away from the raw punk rock intensity of their early work to more of a garage rock sound. The band themselves described the album as being like 'a velvet glove with brass knuckles, both brutal and sophisticated at the same time'. The album yielded the singles "Hate To Say I Told You So", "Main Offender", "Die, All Right!", and "Supply & Demand".

After seeing the video for "Hate To Say I Told You So" on German TV, Alan McGee (Oasis, Creation Records) decided to sign the band to his newly formed Poptones label. Poptones released the 'best of' compilation, "Your New Favourite Band", in 2001 which proved to be their breakthrough record, reaching #7 in the UK album charts. Following the success of the album, the band re-released singles "Hate To Say I Told You So" and "Main Offender" which reach numbers #23 and #24 respectively in the UK Singles chart. The band also re-released "Veni Vidi Vicious" in the US.

It was during the promotion of "Veni Vidi Vicious" / "Your New Favourite Band" that The Hives signed a record deal with Universal Music, reportedly worth $12 million. This led to a dispute between The Hives and Burning Heart, who claimed that The Hives were still contracted to them for one more album.

After extensive touring, the band retreated to Fagersta to record their third album. The result was 2004's "Tyrannosaurus Hives", their first new material in four years. The album includes the hit singles "Walk Idiot Walk" (which debuted at #13 on the UK singles charts) "Two-Timing Touch And Broken Bones", and "A Little More For A Little You".

The Hives are currently in the studio working on the follow-up to "Tyrannosaurus Hives" due out by autumn 2006. The title of the album is rumoured to be "The World's First Perfect Album".