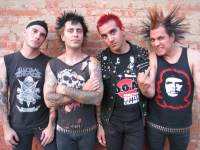 The Casualties are an American street punk band which was formed in New York City in 1990. It was formed by vocalist Jorge Herrera, Hank (guitar), Colin Wolf (vocals), Mark Yoshitomi (bass) and Yureesh Hooker (drums). Hank's last name of several is unknown. Jorge Herrera from Ecuador is the only remaining member of the originals. During the early years of the band, the members were very fluid.