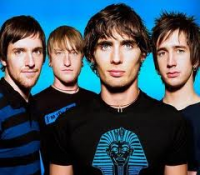 The All-American Rejects is an American synth driven pop-rock band that formed in Stillwater, Oklahoma. Their latest album Move Along was released in 2005 while the single "It Ends Tonight" reached number eight on the Billboard Hot 100 in January 2007.

The band's musical genre has been described as power pop,indie rock, and emo, although the band does not self-identify as an emo band.

The Pre-All-American Rejects era consisted of two bands. One band was known as the Drowning Fish and included the future All-American Reject Nick Wheeler. At the time, Wheeler was his band's drummer. Also, a part of the Drowning Fish was guitarist Jesse Tabish, who is now playing with a rising Oklahoma indie act, Kunek. Tyson Ritter's first band was known as Curbside Service. Ritter stuck mainly to vocals because he was still learning to play the guitar at the time. After Ritter and Wheeler met at a party, Wheeler informed Ritter that his band was in need of a bass player. Ritter responed by telling Wheeler that he was their man even though he had never really attempted to play a bass guitar in his life. In 1998, Ritter joined up with Tabish and Wheeler and the All-American Rejects were formed. The name of the band was inspired by a compromise between two suggested names, The All-Americans, and The Rejects. After parting ways with Tabish in 2000, the All-American Rejects became a two man show. Ritter led the way with his charisma and bass playing ability and Wheeler switched from drummer to guitar player. The band also used a drum machine that was pre-programmed by Wheeler. The band released their first independent album in the spring of 2000, and eventually built up a large local fanbase. They went on to open for The Flaming Lips and Caroline's Spine. Their music was also licensed for use on then-hit MTV show Undressed.

In the summer of 2001, the Rejects released the EP Same Girl, New Songs and began to tour the American Midwest. By the tour's end, the band had signed a contract with Doghouse Records - the label of such bands as River City High and The Get Up Kids.

Mike Kennerty (guitar, vocals) and Chris Gaylor (drums, percussion) joined in 2002. That year, with producer Tim O'Heir (who had, in the past, worked with bands like Superdrag, Sebadoh, and Juliana Hatfield), the Rejects recorded their international debut album. From this album came the single "Swing, Swing," for which the Rejects were best-known for several years (so much so, in fact, that some termed the band a one-hit wonder). The self-titled album hit stores on October 15 of that year.

On July 12, 2005, they released Move Along, from which came the single "Dirty Little Secret". The music video featured images from collective art project PostSecret. Later that year, the band saw themselves forced to cancel several concerts, including a full European tour, after their touring keyboardist Tim Jordan committed suicide.

The second single "Move Along" was released in January 2006. Within the first weeks after premiering their video, it had been on the TRL countdown ever since, hitting number one for days in row, moving from place to place. Oddly, on the Billboard Hot 100, the single didn't hit peak until almost six months later in June, making it one of the longest lasting singles by the Rejects. "Move Along" was then nominated for Best Editing in a Video and Best Group Video at the 2006 Video Music Awards, the latter of which they won. In addition, the band performed "Move Along" live at the VMAs on Thursday, August 31st, 2006.

They have also received song-spots on TV. In July 2006, the single "Move Along" was announced as the official WWE Diva Search 2006 theme song and is being used in advertisements for the Toa Inika figures of Lego's Bionicle franchise. 'Free the Band' is its motto. Also the song "Change Your Mind" was used in an ad for T Mobile. The All-American Rejects are also apparently part of an alternate reality game promoting Lego's Bionicle toy line.

So far, the band has toured around the US with Fall Out Boy, Hawthorne Heights, From First to Last, The Hush Sound, and October Fall in the Black Clouds and Underdogs Tour. They have recently finished a headlining tour called "Tournado" with Motion City Soundtrack, The Starting Line, The Format, Gym Class Heroes, and Boys Like Girls.

To promote the band, the Rejects released a small EP, Bite Back. It is available only on the iTunes.