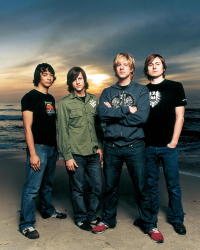 Switchfoot is an alternative rock band from San Diego, California, United States, known for its spiritually evocative and socially aware lyricism. The current members are Jon Foreman (vocals, guitar), Tim Foreman (bass, backing vocals), Chad Butler (drums), Jerome Fontamillas (guitar, keyboard, backing vocals), and Drew Shirley (guitar). Known for their energetic live show, the three guitarists in the line-up often operate simultaneously, and, rounded out by Jerome's work on the synthesizer, informed by his industrial background, the band works up a melodic and densely layered sound with electronic flourishes, often driven by hard-charging guitar riffs. Switchfoot gained mainstream recognition after the inclusion of four of their songs in the 2002 movie A Walk to Remember. This recognition led to their major label debut, The Beautiful Letdown, which was released in 2003, featuring their best-known singles, "Meant to Live" and "Dare You to Move".

According to Jon Foreman, the name "Switchfoot" is a surfing term. "We all love to surf and have been surfing all our lives so to us, the name made sense. To switch your feet means to take a new stance facing the opposite direction. It's about change and movement, a different way of approaching life and music".

Switchfoot was founded in 1996 as "Chin Up", consisting of Jon and his brother Timothy, along with Chad on the drums. After only playing several shows, in 1997, the band was contacted by Charlie Peacock, and signed to his re:think Records, a division of Sparrow Records, under the current moniker "Switchfoot". Re: think would distribute their first three albums, The Legend of Chin, New Way to Be Human and Learning to Breathe.

Of Switchfoot's first three albums Learning to Breathe was the most successful. The album was certified gold by the RIAA, and received a Grammy nomination for Best Rock Gospel Album.

In 2002 Switchfoot had a large role in the music for the movie A Walk to Remember. Singer and actress Mandy Moore, who starred in the movie, sang Switchfoot's song "Only Hope" during a scene in the movie. The movie's sound track also featured a duet with Mandy Moore and Jon Foreman, and as many as four other Switchfoot songs, besides Mandy Moore's cover of "Only Hope".

In early 2003 Switchfoot released their major label debut, The Beautiful Letdown, representing the band's evolution from the predominantly lo-fi, indie rock sound of their early albums, toward a more layered, synth-influenced sound that helped launch the band to mainstream popularity. This could be attributed to the fact that the album was the first to include keyboardist Jerome Fontamillas, formerly of industrial bands Mortal and Fold Zandura. Jerome had been touring with Switchfoot since 2000, following the release of Learning to Breathe.

The Beautiful Letdown has been certified double-platinum, and went on to sell more than 2.6 million copies,on the strength of constant touring and huge radio hits "Meant to Live" and "Dare You to Move" (which received a Nickelodeon Kids' Choice Award in 2005). A DVD of the band's live concert, Live in San Diego, went platinum as well. "This Is Your Life" was also released as a radio single, and the song "Gone" has received airplay on Christian radio stations as well, despite not being released as an actual single. In 2005, Switchfoot received five Dove Award nominations, and won four, including Artist of the year.

In 2005 prior to the release of Nothing Is Sound Switchfoot announced that guirarist Drew Shirley had become the band's fifth member after touring with Switchfoot since 2003. Nothing Is Sound, was released on September 13, 2005, and with Drew's inclusion saw Switchfoot's sound become even more densely layered and guitar-heavy, resulting in an album that was edgier and darker than any of their previous works. To promote this album Switchfoot had previously released "Stars" as a radio single, which was played on many mainstream radio stations. "We Are One Tonight" was released as a single in early 2006.

The album debuted at #3 on the Billboard 200 albums chart, an all-time high for the band, while bassist Tim Foreman attracted headlines by speaking out against the copy-protection[4] used by the label and providing fans a detailed workaround on the band's message board, which was quickly deleted by Sony. This copy-protection is known as Extended Copy Protection, which has been identified by leading anti-virus companies as a trojan horse and a rootkit.

In Spring of 2006 the band introduced "a video diary of life on the road" in the form of freely downloadable video podcasts available via iTunes. In addition to featuring snippets of upcoming songs and live performances, the videos give fans an inside look at the more casual and humorous aspects of the band members' touring lives, as well as the band working on their upcoming album.

Switchfoot's most recent album Oh! Gravity. was released on December 26, 2006. It entered the billboard chart at #18 and peaked at #1 on iTunes' Top Albums chart.

To promote it, the band first released the song, "Dirty Second Hands," via iTunes on September 26. The title song "Oh! Gravity" was also prereleased on iTunes on October 21, then as the album's first single, and then for radio on October 31, after premering the music video on Yahoo! Music on November 13, 2006. Intially the single has enjoyed moderate success on the alternative and modern rock charts.

Prior to the release of the album, on June 2, Switchfoot e-mailed a newsletter containing a free download of "Daylight to Break" and a statement from Tim implying that the band wanted to have a new album out by the end of the year, as well as a thanks to their fans for helping keep the band together for ten years. The band tried to involve their fans in the creation of the album, setting up a webcam in their recording studio, and running a contest to give fans a chance to win an opportunity to play a cowbell part in the studio with the band.

Switchfoot's frontman and guitarist Jon Foreman cites his musical influences as U2, The Police, The Beatles, Johann Sebastian Bach, Ronny Jordan, Miles Davis, Keith Green and Nirvana. Guitarist Drew cites U2, Miles Davis, Stevie Ray Vaughan, Tommy Walker, Phil Keaggy, Michael Jackson, Dave Matthews Band and the Brand New Heavies, while bassist Tim pays tribute to Paul McCartney and Stevie Wonder. Chad also cites Stevie Wonder as his main influence, besides Dave Grohl.Though they draw from a varied number of influences, they sound very different from any of their heroes. Weve never fit in any of the genre boxes,says Jon. I think that diversity is our strength.

Songwriters like Bono, Bob Dylan and Johnny Cash, have inspired Jon's soul-searching lyrics. "We try to make music for thinking people," he mentions, which is evident in his allusions to the works of philosophers like Soren Kierkegaard and Augustine of Hippo in the songs "Sooner or Later (Soren's Song)" and "Something More (Augustine's Confession)" respectively. "Meant to Live", the band's runaway hit, was inspired by T. S. Eliot's poem "The Hollow Men", while "Stars", the lead single off Nothing Is Sound, briefly "looks at things from the Descartes perspective," according to Jon.