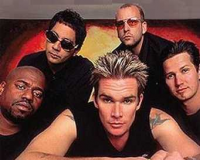 Sugar Ray is an American band formed in 1986. The band, starting off more as a funk metal band, first gained fame in 1997 with their release of the song "Fly". This song's success, coupled with its pop rock sound that was quite different from the rest of their material at the time, led the band to change to a mainstream, pop music style. Subsequent albums shared this similar style, and the band landed a number of hits with "Every Morning", "Someday", and "When It's Over".