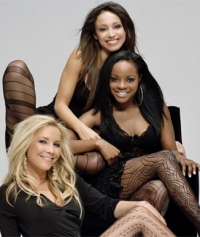 The Sugababes are an English pop girl group based in London, consisting of members Heidi Range, Amelle Berrabah and Jade Ewen. The Sugababes were formed in 1998 with founding members Siobhán Donaghy, Mutya Buena and Keisha Buchanan. Their debut album, One Touch, was released in 2000 under London Records. Donaghy soon departed from the group, which was later dropped by London. With the introduction of Range, the Sugababes signed with Island Records and experienced a higher level of commercial success, releasing three multi-platinum albums. The band survived a second line-up change when Buena left and was subsequently replaced by Berrabah. After eleven years in the band, Buchanan was replaced by Ewen. The fourth line-up signed with RCA Records in 2011 after parting with Island. Donaghy, Buena and Buchanan formed a separate group the same year, Mutya Keisha Siobhan.