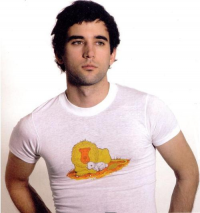 Sufjan Stevens ( SOOF-yahn; born July 1, 1975) is an American singer-songwriter and musician born in Detroit, Michigan. Stevens first began releasing his music on Asthmatic Kitty, a label co-founded with his stepfather, beginning with the 1999 release, A Sun Came. He is best known for his 2005 album, Illinois, which hit number one in the Billboard Top Heatseekers chart, and for the song "Chicago".