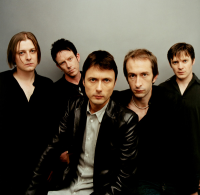 Suede are an English alternative rock band from London, formed in 1989. The group's most prominent early line-up was Brett Anderson (singer), Bernard Butler (guitarist), Mat Osman (bass guitarist) and Simon Gilbert (drummer). By 1992, Suede were described as "The Best New Band in Britain", and attracted much attention from the British music press. The following year their debut album Suede, went to the top of the charts by becoming the fastest-selling debut album in almost ten years. The album won the Mercury Music Prize and helped foster Britpop as a musical genre. However, the band's lush follow-up, Dog Man Star (1994), showed Suede distancing itself from its Britpop peers. Although it is often regarded as the band's masterpiece, the recording sessions for Dog Man Star were fraught with difficulty, and ended with Butler departing the band after confrontations with Anderson and musical differences with the rest of the band. Its sales suffered due to these events, however it was met with a generally enthusiastic reception on release and has, over time been lauded with universal acclaim from critics.