Story Of The Year 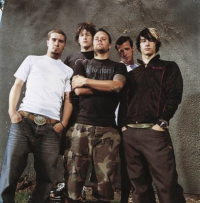 The band recorded a few demos after its formation and might have recorded some EPs. However, they didn't release their first album, Page Avenue, until September of 2003. Their first single from that album was "Until The Day I Die" written by singer Dan Marsala. It first received radio airplay around July/August 2003 on stations like KROQ and sold thousands of copies worldwide. The second single "Anthem of Our Dying Day" featured a music video directed by Mr. Hahn of Linkin Park. Page Avenue has now sold over 500,000 copies worldwide. The single "And the Hero Will Drown" was featured on the soundtrack to the multi-format game Need for Speed: Underground.

The band toured with Linkin Park on the Meteora World Tour in 2004 along with P.O.D. and Hoobastank. They were also on the Van's Warped Tour, and featured in the Vans Warped Tour documentary, Wake Up Screaming, and at KROQ's Weenie Roast on June 12th that same year.

Live in the Lou/Bassassins (a CD/DVD combo of live preformances and touring video) was released on May 10, 2005. It was a hit amongst Story of the Year fans and was certified Gold by the RIAA in late 2005.

They have recently completed filming for their second single off the new album entitled "Take Me Back".

The band has just finished their tour of Australia with support bands Emery and Flogging Molly. It was rated as a success amongst the fans throughout Australia. Also, critics acclaimed that because of the wide age group (between 13-30yr olds) that attended the Australian concerts in Perth, Melbourne, Adelaide, Sydney and Brisbane, the band played songs that were more suited for all ages rather than the heavier style that they played at the 2005 International Taste of Chaos, which was suited for more older ages. Although this was a factor the fans of the band hailed Story of the Year's performance. They then took a well deserved break in Queensland. And are planning to return before the end of 2006 for another tour of Australia. A suggestion is that they could return with other bands for the 2006 Taste of Chaos, but that is just an idea.