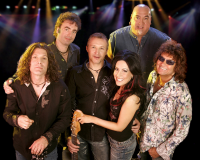 Jefferson Starship is an American rock band formed in the early 1970s by several members of the former psychedelic rock group Jefferson Airplane. The band has undergone several major changes in personnel and genres through the years while retaining the same Jefferson Starship name. The current Jefferson Starship, led by co-founder Paul Kantner, more closely resembles its original mix of psychedelic and electric folk music than the pop-driven tunes it was widely known for in the early to mid-1980s. It is not to be confused with Starship, a spin-off of the group featuring former co-lead singer Mickey Thomas that also periodically tours. The latter group is most frequently identified with the 1980s pop tunes of the Jefferson Starship.