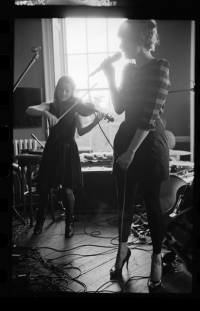 Sophie Barker (born November 5, 1971) is a British singer from London, best known for her work with the British downtempo group Zero 7. Barker left University College London after two years to become a full-time singer, signing with Sony Records in 1996 with Kate Holmes (formerly of Frazier Chorus and now with Client) under the name "Sirenes. " Sirènes released three singles, Blind, Deep End, and Sun Don't Shine, before splitting up at the end of 1997. Barker co-wrote Zero 7's biggest hit, "Destiny", and sings the song alongside fellow vocalist Sia Furler. Barker also co-wrote and sang Zero 7 songs such as "In The Waiting Line" on the Zero 7 album Simple Things, which has sold more than one million copies worldwide, and also the song "Spinning". She also contributed to the follow-up Zero 7 album When It Falls, co-writing the songs "Passing By" and "In Time".