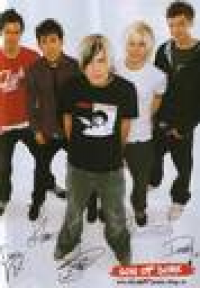 Son of Dork were a British pop rock band formed by James Bourne after his previous band, Busted, split in January 2005. The name of the band came from a scene in the movie Problem Child where the chant "Son of Dork" is used. Their debut single, "Ticket Outta Loserville", was released in November 2005, reaching No. 3 on the UK Singles Chart. Their second single, "Eddie's Song", reached No. 10 in January 2006.