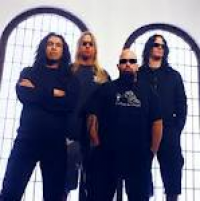 Slayer is an American thrash metal band, founded in Huntington Park, California (not Huntington Beach, as has often been reported), in 1981 by Tom Araya (bass guitar and vocals), Kerry King, Jeff Hanneman (guitars) and Dave Lombardo (drums). Lombardo has been in and out of the group three times, but the other members have been permanent members. Hanneman and King are the group's main songwriters.

Slayer (along with Metallica, Anthrax, Megadeth and others) is often credited with creating American thrash metal by speeding up the sound of NWOBHM bands like Iron Maiden. Slayer also drew from hardcore punk influences like Minor Threat, Dead Kennedys and The Misfits; borrowing some of that music's emphasis on extremely quick tempos in many of their songs. Some of Slayer's music can be quite progressive, as they often change tempos and arrangements multiple times through the course of a single track.

Slayer has found moderate commercial success and are known for their devoted cult following. Their lyrics (touching on subjects like serial killers, the Holocaust, warfare, and Satan) and their graphic album art content have generated strong criticism.

Though Araya has never used the "death grunt" vocal style usually associated with death metal, Slayer's music (most notably on the albums Hell Awaits (1985) and Reign in Blood (1986)) is generally regarded as a major influence on death metal. However, due to the higher pitched vocals in their songs (compared to the lower death metal range), their influence on black metal must also be noted. Several premier black metal acts such as Emperor and Mayhem name Slayer as an influence.

The band was originally known as Dragonslayer before shortening its name to Slayer. Contrary to what some believe, the name was not chosen as an acronym for Satan Laughs As You Eternally Rot; rather, this wording, found on the liner notes to Divine Intervention, was added as a backronym after the name was shortened. Araya has jokingly stated that they chose Slayer because "it was cool, easy to chant".

Slayer's first album, Show No Mercy, was released in 1983 on Metal Blade Records. Today it is regarded as second-rate compared to later albums, but it is still considered a classic by some and contains fan favorites such as "Die By the Sword", "The Antichrist" and "Black Magic." It was essential in gaining the band a cult following and respect in the metal community.

The band's second release, the Haunting the Chapel EP, was considerably darker and more thrash-oriented than its predecessor, and it is considered to have laid the groundwork for what the band's classic sound would become. It contained the now classic "Chemical Warfare," which is typically the song the band plays at the end of its live shows.

The band's second full-length release, Hell Awaits, expanded on the darkness of Haunting the Chapel, as hell and Satan were common song subjects. Musically it was probably the band's most progressive offering, containing only seven tracks, three of which clocked in at over six minutes. The opening track has a demonic-sounding voice saying "Join us" backward, and may be partly responsible for the idea of backmasking being used to subliminally spread harmful messages through popular music.

After being offered a recording deal by Rick Rubin's Def Jam Recordings, the band signed and quickly began working on its third album with Rubin as co-producer.

The result, 1986's Reign in Blood, has been called a "thrash metal masterpiece" and even credited with almost single-handedly inspiring the entire death metal genre, at least in North America. Kerrang! described Reign in Blood as "the heaviest album of all time". In 2003 Slayer played the album in its entirety throughout their full tour (something they never did on the original album tour). A DVD of one of these performances was released with the title Still Reigning. The "Raining blood" portion of the show concluded with the band being drenched in a rain of fake blood.

South of Heaven, released in 1988, marked a slight musical departure. To contrast the aggressive assault put forth on Reign in Blood, Slayer slowed down the tempo on a few tracks. They also added elements like undistorted guitars and toned-down vocal styles not heard on previous albums. Some critics praised the album as demonstrating Slayer's desire to grow musically and avoid repeating themselves. But the new sounds disappointed some of the band's fans who were more accustomed to the style of earlier releases. Even though fans remain divided on the subject, two songs from the album ("Mandatory Suicide" and "South of Heaven") have become almost permanent additions to the band's live setlist. Following the release of South of Heaven, the band recorded a thrash-metal cover of Iron Butterfly's signature song, In-A-Gadda-Da-Vida. This song was included on the soundtrack to the movie Less Than Zero.

The follow-up album, Seasons in the Abyss, was more of a return to the sound of Reign in Blood and was greeted warmly by fans. A video clip for the title track had the band playing in the Middle East, shortly before the start of the Gulf War. It uses the doubling of Tom Araya's vocals on "Temptation" and a child's voice pleading underneath the track "Dead Skin Mask" (about necrophile Ed Gein), showing Slayer continuing to expand on their ideas and music.

A double live album, Decade of Aggression, followed in 1991, with a three-year hiatus (except for a brief tour of California, Arizona and Baja California, Mexico, as a warm-up for their appearance at the 1992 Castle Donington "Monsters of Rock" festival) until 1994's Divine Intervention. This new studio album showed Slayer had not lost their edge, with songs about Jeffrey Dahmer ("213," his apartment number) and Reinhard Heydrich ("SS-3," the license number of his car) amongst other themes of murder and the evils of church and government. Live Intrusion, a video of concert footage, was released about this time and features a joint cover of Venom's "Witching Hour" with Machine Head, who were Slayer's support at the time. Relations between Kerry King and Robb Flynn have since badly deteriorated.

Diabolus in Musica (The Devil in Music) was released in 1998 and marked, along with an altered logo, a change in compositional style for the band. This style incorporated a new groove into some song structures and fan reaction was divided. Nevertheless, a successful world tour followed.

God Hates Us All, Slayer's most recent studio album, was released on September 11, 2001. They have also released a live DVD (War at the Warfield) and box set (Soundtrack to the Apocalypse) featuring rarities, live CD and DVD performances and various Slayer paraphernalia.

In 1996, a lawsuit was brought against the band by the parents of Elyse Pahler, who accused the band of encouraging their daughter's murderers through their lyrics. The lawsuit was thrown out in 2001, for multiple reasons including "principles of free speech, [lack of a] duty and [lack of] foreseeability" - California Superior Court of San Luis Obispo County.

The band received their first Grammy nomination for "Best Metal Performance" on January 8, 2002.

Critics accuse the band of holding Nazi sympathies, basing this claim on the lyrics of the song "Angel of Death" from the Reign in Blood album (which, incidentally, was produced by Rick Rubin, who is Jewish). The lyrics were inspired by the acts of Josef Mengele, the doctor who committed atrocities against Jewish and Gypsy prisoners in the name of scientific research during World War II, and who concentration camp inmates dubbed the "Angel of Death".

In addition to the controversy caused by "Angel of Death", Slayer's cover of Minor Threat's "Guilty Of Being White" raised questions about a possible message of white supremacy in the band's music. Most of the controversy surrounding the cover involved the changing of the refrain "guilty of being white" to "guilty of being right" at the song's climax. This reportedly incensed Minor Threat frontman Ian MacKaye.[citation needed]

An argument is made against these theories both by Slayer's supporters and what seems to be definitive proof that these critics are wrong in their accusations. In a 2004 interview with Tom Araya, when asked, "Did critics realize you were wallowing in parody?", Tom Araya replied, "No. People thought we were serious!...Back then you had that PMRC, who literally took everything to heart. When in actuality you're trying to create an image. You're trying to scare people on purpose". Those who disagree with these critics assert that Slayer has no Nazi sympathies or racist views, and point out that Tom Araya and Dave Lombardo have Hispanic ancestry. It is also worth noting that true Nazi sympathizers are well-known for their Holocaust denial, which is inconsistent with use of the "Angel of Death" lyrics as a basis for criticism because the song describes events that real Nazi sympathizers claim never occurred.

Slayer often seeks to challenge societal norms and problems, therefore their lyrics, which may appear shocking, seek to promote opposite ideals of tolerance and nonviolence. Additionally, Slayer has ties to the hardcore punk scene, which, aside from the Nazi punk element, is overwhelmingly anti-racist.

The long-awaited new album Christ Illusion (released on August 8) was to be released on June 6, 2006, a reference to the Number of the Beast. However, due to recording difficulties, the date has been pushed back and instead Kerry King attempted to use the date June 6 to re-launch his personal website, www.kfkindustries.com (which is still pending). This album will be the first with original drummer Dave Lombardo since Seasons in the Abyss. A new song, "Cult", is now available at www.slayer.net.

Prior to releasing the new album, Slayer released Eternal Pyre on June 6, 2006, a limited-edition EP that features the new song "Cult", a live performance of "War Ensemble" in Germany and video footage of the band recording "Cult" in the studio, was released exclusively through Hot Topic. The pressing of 5,000 CDs sold out within hours of its release. During the week of the Christ Illusion CD release, the full album could be heard on Slayer's MySpace page.

On August 16th 2006, Slayer's latest album "Christ Illusion" debuted at #5 on the Billboard Top 200 chart, selling 62,000 copies. Source Billboard.com. This is the band's highest chart position in the United States to date, besting the previous #8 debut of "Divine Intervention" in 1994. The following week the "Christ Illusion" album dropped to #41 on the charts.

2001 - God Hates Us All American Recordings