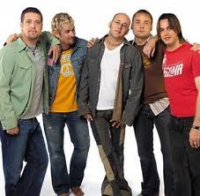 Sister Hazel is an alternative rock band from Gainesville, Florida, whose style also blends elements of folk rock, pop, classic rock 'n' roll and southern rock. Their music is characterized by highly melodic tunes and prominent harmonies. Most of their songs have optimistic lyrics. The band's instrumentation often features abrupt shifts among electric, acoustic and a cappella, with striking use of tacets. Though often described as alternative, Sister Hazel leans toward an upbeat sound and away from the clashing punk discordance often associated with the alternative rock genre.