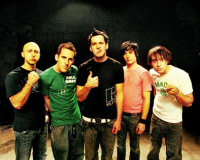 Simple Plan came about in stages that began with the founding of the band Reset in 1995, a Canadian punk band, by high-school friends Pierre Bouvier, Charles-Andre (Chuck) Comeau and Adrien White at the age of thirteen. Reset toured around Canada with bands such as MxPx, Ten Foot Pole, and Face to Face, but only managed to gain modest popularity. The debut album was released in 1997. Comeau soon left to go to college, but two years later he hooked up with Jean-Francois (Jeff) Stinco and S?bastien Lefebvre, and again started making music. It was coincidence that brought Comeau and Bouvier back together at a Sugar Ray concert in late 1999, and Bouvier soon left Reset and joined his old friends. David Desrosiers replaced Bouvier in Reset, but when asked to join the foursome, he too left the band and joined the four friends.

When asked on where their name originates from, one band member has stated "we didn't like complicated situations, we wanted something simple," thus, the name and band Simple Plan was born. However, band members have given various responses on this point, including a liking for the movie A Simple Plan; that the band was their simple plan to avoid getting a "real" job; and that the name was only intended to be temporary, but they never thought of anything better.

The band tours intensively, and in the period March 2005-March 2006, will cover all six inhabited continents, plus Japan and New Zealand. It has announced plans for a third original CD, to be released in the fall of 2006.

Role Model Clothing, the label that Bouvier and Comeau are often seen sporting, was actually formed before Simple Plan by Comeau, Bouvier, and their friend Patrick Langlois, who is now responsible for merchandising and distribution via the web, as well as being videographer for the band. Langlois and Lefebvre also have their own side project, a label called Man of the Hour, which is just starting out.

Simple Plan was also one of the stars in Rockstars Have Kidnapped My Son. In this show, they took a kid named Melvin Lasky, and helped him gain the confidence he needed.