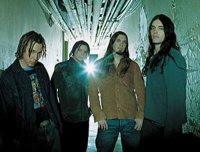 On July 13th, 2003, the band released their debut album Leave A Whisper. The album sold strongly thanks to the popularity of singles "Fly From The Inside" and "45", and was rereleased on June 15th, 2004, to capitalize on the strength of a new single, a cover of Lynyrd Skynyrd's "Simple Man". The rerelease also featured an acoustic version of "45", and a new mix of "Burning Bright", which was to be the fourth single from the album. During 2004, the band notably opened for classic rock band Van Halen. On September 21st, 2005, Leave A Whisper was certified as platinum. On August 23rd, 2005, the band released a live DVD called Live From The Inside that contained a full-length Shinedown concert held at the House Of Blues in Myrtle Beach, South Carolina.

On October 4th, 2005, the band released their sophomore album called Us And Them, backed by the single "Save Me". "Save Me" did quite impressively on radio, holding the #1 position on active rock charts for twelve weeks. The song became the theme song for WWE No Mercy 2005. The follow-up single, "I Dare You", also did respectably, and became one of the theme songs of WWE's WrestleMania 22 There are currently three versions of Us And Them: the regular thirteen-track version, a limited edition with three bonus acoustic tracks, and a store-specific edition with two bonus tracks: "Break" and "Carried Away". In 2006, the band co-headlined the SnoCore Tour with Seether (supported by Flyleaf and Halestorm), and followed with the Equinox Tour co-headlining with Trapt (supported by Evans Blue, Halestorm, and Mercy Fall). Shinedown played their first overseas gig at the London Astoria on June 6th, 2006, supporting Alter Bridge.