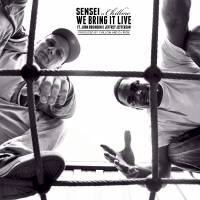 Sensei 'n Chillow, part 3 of the ['n Chillow series]! Chillow is in the lab with El da sensei (one half of the legendary artifacts)

Biografie
El Da Sensei is an American rapper from Newark, New Jersey. During the 1990s he was a member of the influential hip hop duo, Artifacts.
Since then he has released several solo albums to critical acclaim.
Now he is working on a new album with Belgium producer/dj/beatmaker Chillow.
This album will be the 3th album of the 'n Chillow series. Also check out part one namely Reap 'n Chillow - Ny2be (Jazzy hiphop) and part 2 named Jefferson 'n Chillow - Muddy Grounds (Neo soul, Hiphop)

While waiting on the full length of the Sensei 'n Chillow album named NJ2BE (New Jersey to Belgium)
y'all can check out the 2 singles they dropped.