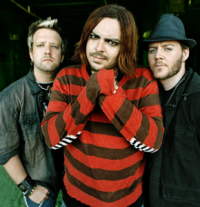 Seether is a three piece hard rock band from South Africa. Originally called Saron Gas, they changed their name in 2002, coinciding with the release of their first major label release and second album, Disclaimer.

As Saron Gas, the band released its first album, Fragile, in 2000 in South Africa. Upon achieving success on the South African music charts, Wind-Up Records took an interest in Saron Gas' melodic-yet-heavy sound and signed them to the label. The band was asked to change their name, however, due to Saron Gas being a homonym of sarin gas, a deadly nerve agent. The band chose the name Seether, inspired by a single by the band Veruca Salt. Their first major release came in 2002 with the album Disclaimer. The album spawned three singles, Fine Again,Driven Under and Gasoline, but only Fine Again charted with any success. The remaining singles got semi-frequent radio play on modern rock stations, but were not major chart hits. Ironically, the biggest hit off the album was a song not even released as a single.

After Disclaimer was released, the band went on a non-stop touring route in hopes of boosting sales and name recognition. Upon completing the tour, the band had planned to go into the studio and record their sophomore release. However, they were instead tapped to support Evanescence on a worldwide tour that postponed their recording plans by almost a year. On this tour, the band reworked the acoustic ballad Broken into an electric ballad and had Amy Lee of Evanescence share vocal duties with Morgan during live performances. Inspired by the positive reaction the duet got on the road and perhaps fueled by a budding romance between Lee and Morgan, the band headed into the studio and quickly recorded an alternate version of Broken with Lee on vocals. The song, along with a new song titled Sold Me, was featured on the soundtrack for the 2004 film The Punisher. The reworking of the song garnered mixed reviews from some Seether fans, who felt the song was too soft for Seether's typically heavy, grunge-inspired sound or felt the band was simply hoping to ride Evanescence's fame to greater heights and were "selling out" in the process. These criticisms combined with some unflattering comments made about Lee on the band's message board prompted Morgan to promise never to rework another Seether song and may have also led to the couple's break-up. Later in 2004, in an attempt to calm fans who were demanding a second album, the band released Disclaimer II, an alternate version of the original album with many of the songs remixed or re-recorded as well as eight extra tracks, two of which were the tracks off the Punisher soundtrack.

In 2005, the band finally recorded and set a release date for their follow-up album called Karma & Effect. The original title for the album was Catering to Cowards, but the band was pressured to change the title by Wind-Up Records. The album featured a sound different than their previous releases, most notably a fuller and richer sound, no doubt caused by the addition of a second guitarist for the album's writing and recording process. The album was also noted for not containing any "obscenities," something that Disclaimer could not claim nor could most of the albums released in the modern rock milieu. Despite initial concerns among fans that Seether may have been pressured to "clean up" the album's lyrics by Wind-Up Records, Morgan stated that it was simply the result of him maturing as a writer and a musician and realizing that he could convey his thoughts and feelings with just as much emotion and conviction without resorting to obscenity as a crutch of sorts.

In addition to the soundtrack for The Punisher, Seether have also had their songs featured on the Freddy vs. Jason soundtrack and in the film Daredevil. The song Out Of My Way was the entrance music for former World Wrestling Entertainment (WWE) Superstar Zach Gowen. Broken was featured on a career retrospective DVD for the late Eddie Guerrero. Their song Sold Me was the official theme song of WWE's Bad Blood pay-per-view event in June 2004, while Remedy was the official theme song of the 2005 installment of WWE SummerSlam. In mid 2005, Seether released a video of the song Truth which also featured wrestling. In March 2006, the band performed at "The Coca-Cola Colab Massive Mix", with Simple Plan, The Rasmus, Fatboy Slim, and Collective Soul, with Metallica headlining. They will also be the headliners to this year's Winterfresh Snocore tour featuring Shinedown, and Flyleaf as the supporting acts. Seether will soon be embarking on a tour of the UK (as of April 2006) with support by the Essex based punk band Engerica. Their song Fine Again also featured on the Nintendo GameCube video game, 1080? Avalanche and on Madden NFL 2003.

Seether will release an acoustic CD/DVD set called One Cold Night on July 11th featuring 14 songs recorded at Grape Street in Philadelphia. The performance, remarkable for its acoustic nature, was one of a few the band did during their run as co-headliners of the 2006 Snocore Tour with Shinedown. Morgan, who had been suffering from a stomach ailment, was rendered unable to perform with his typical vigor and found himself faced with difficulty when attempting to scream as he often does in certian songs. Rather than cancel their performances, the band chose to perform toned-down, acoustic versions of their typical setlist.

On June 16, it was announced via Seether's official site that lead guitarist Pat Callahan had chosen to leave the band. The announcement came as a surprise to many fans and the exact reason for Callahan's departure is unknown, but the band expressed their best wishes for Callahan in his future endeavors. Despite touring for the better part of four years as a four piece band and recording the majority of their material with two guitarists, the band has stated that they are planning to go "back to basics" and remain a three-piece unit, as they started out, for the forseeable future.