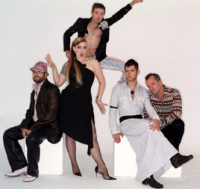 Scissor Sisters are an American band that formed in 2001, who have had massive success in the UK and Ireland. Their US record sales are modest compared with their UK sales, where they are now one of the decade's biggest-selling acts. Their influences are disco, glam-rock/pop and the gay-club scene of New York City. The group is named after a sex position between two women - tribadism. The initial full name was Dead Lesbian and the Fibrillating Scissor Sisters.

The core of the band formed in 2000 when Shears and Babydaddy met while attending college in Kentucky, and began to play music together. After moving to New York City, the duo met Ana Matronic at a cabaret on Halloween, when she was dressed as an Andy Warhol factory reject, and Shears was dressed as a "back-alley abortion". The group soon began playing gigs, and they met Del Marquis while Jake Shears was still working as a stripper at a club called IC-Guyz. After becoming a quartet, the band was signed to independent record label "A Touch of Class", and recorded a single, "Electrobix", which had as its B-side a disco/glam cover of the Pink Floyd classic, "Comfortably Numb". Paddy Boom joined the band after they placed a classified ad looking for a live drummer.

Their cover of "Comfortably Numb" became noticed in the UK when it was picked up by underground DJs in electroclubs. The Cock venue in London staged their first British gig at this time. The song later got the attention of British label Polydor, who signed them to a contract.

The group's first single for the label, "Laura", had a limited release in 2003 (reaching #54 in the UK singles chart), receiving little attention with the exceptions of British music paper New Musical Express, Channel 4's entertainment programme V Graham Norton and same channel's music programme Popworld for which they were interviewed. The track also garnered plenty of radio play in Australia. 2003 also saw the inclusion of the atmospheric "It Can't Come Quickly Enough" on the soundtrack of the film Party Monster; the song played over its ending credits.

All the singles came from the eponymous debut album Scissor Sisters, which reached #1 on the UK albums chart and became the best selling album of 2004, beating Keane's Hopes And Fears by just 582 copies. As of 2006, it is the 10th biggest-selling album of the 21st century, and the 51st biggest-selling of all time in the UK. Several media outlets have noted that Scissor Sisters 'stick out like a sore thumb' on the list of artists who have sold over 2 million copies of an album in the UK in the 21st century ? the others being James Blunt, Robbie Williams, Keane, Dido, Coldplay and Norah Jones - all artists considered 'mainstream' or 'middle of the road', as opposed to the Scissor Sisters' brash and controversial image.

Despite substantial chart success in the UK (which they refer to as their 'spiritual home'), the band have had only a moderate impact on the public consciousness in their home country. "Take Your Mama" received popular radio airplay on US pop stations. "Filthy/Gorgeous" enjoyed a following in stateside gay clubs.

The album was banned from the shelves of U.S. super chain Wal*Mart due to its "coarse language". The band have shown their dissatisfaction with the decision on a number of occasions, Jake Shears is even heard in a Spanish live performance on the band's DVD saying, "Wal*Mart won't stock our album...well, ya know what? Fuck Wal*Mart!".

Recording of the second album, Ta Dah commenced in mid-May 2005; sneak previews of new songs were played at live shows, including "Everybody Wants the Same Thing", performed at the Live 8 concert, "Paul McCartney", "I Can't Decide", "Hybrid Man", "Forever Right Now" and "Hairbaby" (a title which refers to the phenomenon of tumours containing partially formed foetuses).

Recordings took place at Discoball, the band's studio. The band fulfilled one of its dreams: Elton John collaborated with them on I Don't Feel Like Dancin' (as pianist and co-writer). The song reached #1 in the UK on 10 September 2006.

Elton John also contributed to the "Intermission" of Ta-Dah.

The band will play several gigs in the USA, continental Europe and Japan to promote the new CD. They are currently an opening act for Depeche Mode's 2006 Tour. Their first gig in the UK for promotion of the second album took place at the KOKO Club, Camden, London, on 31 August 2006 and was filmed for MTV. 2006 performances at the Bowery Ballroom and Siren Music Festival in New York, and the Coachella Festival have allowed for the band to showcase an array of songs taken from the new album. A free concert was given in Trafalgar square to 10,000 ballot winners on the 16th September in order to promote the Red charity.

The new album "Ta-Dah" leaked onto the internet on 13 September 2006, five days before its release in the UK.

It rocketed to Number 1 in the U.K charts in its first week of release, officially taking the topspot on Sunday the 24th September 2006, completing an historic first for the Scissor Sisters, a double consisting of a single and album at the top of the UK charts simultaneously.

The lyrics of their songs, largely written by Shears and Babydaddy, are known for their mixture of wit and tragedy. The songs on the debut album dealt with a number of subjects and issues in a variety of styles, from crystal meth abuse in "Return to Oz", to Jake Shears' deep platonic love for his best friend in real life, Mary ("Mary"). Mary died of a brain aneurysm in April 2006, news that devastated members of the band.

Their music can be generally described as a mixture of glam rock, disco, and alternative music. They appear to have been heavily influenced by Elton John (Shears' singing, particularly, sometimes sounds uncannily like John). However, Shears has gone on record as not having been very familiar with John's work prior to the release of their record, although he's stated he's since become a big fan. The band echoes not only Elton John, but also the Bee Gees, KC and the Sunshine Band, Duran Duran ("the reason we got into music", as Ana says), Supertramp, Queen, Chic and various other dance/disco, rock, and funk acts, and they admit that their music is hard to categorize. They prefer not to be specifically labeled as a "gay band". In an interview featured on the We Are Scissor Sisters... And So Are You DVD, the band states, "The fact that some of us are gay affects our music the same amount as it does that some of the members of Blondie are straight".

The band count David Gilmour of Pink Floyd, Roger Daltrey of the Who, U2, Thom Yorke of Radiohead and Elton John among its fans. They were the opening act for Duran Duran's 2004 reunion tour and opened for U2 on some of their UK dates for the Vertigo Tour.