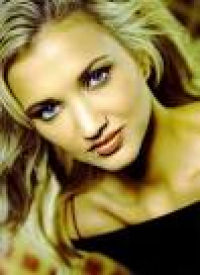 Sarah was born in Des Moines and was raised in small-town Iowa, an only child who still remains very close to her family, especially her grandparents. When a romantic relationship hit the rocks, it was Sarah’s grandmother who often got the late-night distress calls. And it was Sarah’s grandfather who first turned her on to country music. “My grandfather used to take me to church with him every Sunday morning, and we would listen to country radio,” she says. “Somehow country music always felt like home to me. Even now, miles away, it still reminds me of what I love and miss most.”
Growing up, Sarah wrote poetry, not music. She never dreamed one day she’d make a living writing songs – but her biggest fan in the family knew differently. “My mom always told me that someday I’d become a songwriter,” she recalls.” I still don’t know how she knew.” On her 14th birthday, Sarah received a small sound system and began singing everywhere she could find a willing audience: weddings, birthdays, talent shows, pageants, even the Iowa State Fair. When she wasn’t singing, Sarah fished and played first base for her local high school baseball team. (In the final game that won the team the Iowa State championship, a fastball caught Sarah’s nose and broke it, quickly ending her sports career.)
In 2002, a year after graduating from high school, Sarah saved $5,000, packed up everything she owned in a horse trailer, and headed for Nashville on the advice of Joe Carter, Tracy Byrd’s manager.
“We met at a festival, and he asked me to send him some of my songs,” Sarah explains. “I’d always dreamed of making a record and getting discovered in Nashville. After he heard my demos, Joe encouraged me to come to Nashville and signed me to a year’s management contract.” Although nothing came of it, Sarah says she learned a lot. “I paid my bills waitressing, watching other singers and songwriters, and trying to figure out where I belonged.”
In 2003, Sarah auditioned for an E Network reality show called “The Entertainer,” hosted by veteran Vegas showman Wayne Newton. Much to her shock, she was chosen as one of the 10 finalists. She spent the next eight weeks living in the Las Vegas Hilton with the other contestants, singing classic crooner songs on the program, and vying for a million-dollar performing contract.
”I didn’t win, but I finished in the top three,” Sarah says now, “and it was one of the best experiences of my life. It helped my performing so much. They would throw unexpected things at us each week. One night they planted hecklers in the audience to see how we’d handle them. Another time they gave us 30 minutes to put together a complete concert. Wayne Newton took me aside one day and told me I was his favorite singer on the show — but he said I didn’t belong in Las Vegas. He told me I should go back to Nashville and work on my own songs. Being on that show made me realize what I really wanted to do with my life — write music and be an artist. I came back to Nashville and spent the next three years just writing songs, playing out in clubs, and doing shows.”
In addition to supporting herself as a waitress in a Nashville steakhouse, Sarah also did modeling and appeared in a number of country music videos, including “Red High Heels” with Kellie Pickler, “Tequila Makes Her Clothes Fall Off” with Joe Nichols, “Too Much Blood In My Alcohol Level” with David Ball, and “Save A Horse, Ride A Cowboy” with Big & Rich. (In that video, she played a mannequin, and her stiff, non-blinking portrayal was so convincing that “CMT Insider” held an on-air contest to determine whether she was a live person or a dummy. When viewers overwhelmingly voted “mannequin,” Sarah went on the show live to prove she was real.)
A failed romantic relationship became a gold mine of songwriting material for Sarah, and inadvertently led to her record deal with Black River. “I wrote a song called ‘Stop the Bleeding’ that I put on my MySpace page,” says Sarah. “At the same time, Jimmy Nichols had just started Black River Records, and he was looking for a new artist to sign. Jimmy asked the label’s interns to start checking MySpace and let him know if they heard anyone exciting. That’s how he found me.”
From the moment Black River first saw Sarah in a showcase, the label knew it had discovered someone special. Jimmy Nichols’ experience as an A-list studio keyboardist (and Faith Hill’s band leader) gave him a unique perspective on talent. But more importantly, signing with the label was like coming home for Sarah. “Black River seemed like family to me right away, and I’d never felt that before in Nashville,” she explains. “Then when Jimmy and I went into the studio to start recording my album, it was almost magical. He has such an amazing ear, and I learned so much working with him. Jimmy pushed me to the next level as an artist, and showed me it’s not how pretty you can sing, it’s what you feel inside when you sing. And how you make other people feel when they listen to you. He truly brought out the best in each of the songs. The whole process was unbelievable for me.”
Sarah’s debut CD, titled Every Monday Morning, features her collaborations with some of Nashville’s best songwriters: David Malloy, Marc Beeson, Kim Tribble, Marty Dodson and Jeff Dayton. It also includes a song she co-wrote with former Ambrosia lead singer David Pack. It’s a stunning project, showcasing her breathtaking artistry as both a writer and vocalist. The title of the album comes from Sarah’s regular rain-or-shine Monday morning writing sessions with Jeff Dayton, and each of the songs reflects a very personal side of her life.

“I do have very different sides to me, and my co-writers have to adjust,” she laughs. “I can show up for a writing session and come up with a fun, light-hearted song that’s very girly, then turn around and write a deep, serious ‘old-soul song’ full of my own personal emotion. I think we’ve all been through experiences in life where we get our hearts broken or are afraid to trust, and I’ve learned it’s okay to write about these in a song.“
One of the most unusual co-writers Sarah has worked with is veteran TV news personality Harry Smith of CBS’ “The Early Show.” Smith came to Nashville to cover the second Obama/McCain political debate and wanted to show viewers how a song gets written and recorded. Sarah helped with the lyrics and melody, and they performed the tune on the air. “It was great fun. Harry went to college in Iowa, so we had something in common, and by the end of the session, I think Harry really did understand how the whole thing comes together in the studio.” (CBS featured the song, “Red State Blue State Blues,” prominently on its network website during the 2008 election.)
For a small-town girl who moved to Nashville knowing no one (“and with no Plan B as a back-up in case things didn’t work out”), Sarah is thrilled with the way everything is falling into place.
“I’m so glad this is all happening for me now rather than when I first came to Nashville,” Sarah says, “because I feel like I’ve gone through so many experiences and ups and downs here. I appreciate everything so much more now. I moved from Iowa to chase my dream in Nashville. For some people, the dream never comes true. But when I look at where I am and the opportunities I’ve been given, I feel ecstatic and so blessed. I can’t wait to see what’s coming next!”