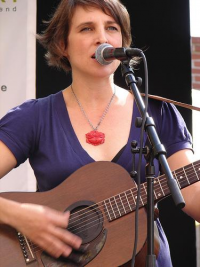 Singer/songwriter Sara Lov was born in Hawaii in 1970 and later was raised by her mother in Los Angeles after the divorce of her parents. At the age of four she was kidnapped by her father, who was in the midst of a custody battle, and she was taken to Israel. Sara Lov lived there with an international fugitive from justice until a decade later when an uncle brought about her repatriation to the United States.