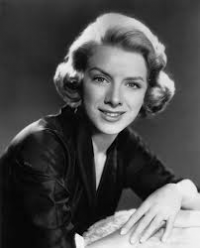 Rosemary Clooney (May 23, 1928 – June 29, 2002) was an American singer and actress. She came to prominence in the early 1950s with the novelty hit "Come On-a My House" written by William Saroyan and his cousin Ross Bagdasarian (better known as David Seville, the father figure of Alvin and the Chipmunks), which was followed by other pop numbers such as "Botch-a-Me" (a cover version of the Italian song Ba-Ba-Baciami Piccina by Alberto Rabagliati), "Mambo Italiano", "Tenderly", "Half as Much", "Hey There" and "This Ole House", although she had success as a jazz vocalist. Clooney's career languished in the 1960s, partly due to problems related to depression and drug addiction, but revived in 1977, when her White Christmas co-star Bing Crosby asked her to appear with him at a show marking his 50th anniversary in show business. She continued recording until her death in 2002. She was the aunt of Academy Award winning actor George Clooney.