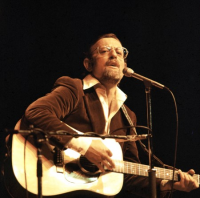 Roger Whittaker (born 22 March 1936) is an Anglo-Kenyan singer-songwriter and musician. His music can be described as easy listening or perhaps best as ballads. He is best known for his baritone singing voice and trademark whistling ability. American audiences are most familiar with his 1970 hit "New World in the Morning" and his 1975 hit "The Last Farewell", the latter of which is his only single to hit the Billboard Hot 100 (it made the Top 20) and also hit No. 1 on the Adult Contemporary chart.