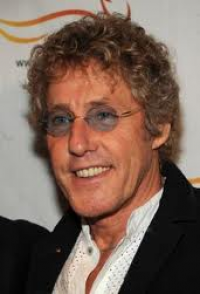 Roger Harry Daltrey, CBE (born 1 March 1944) is an English singer, musician, songwriter and actor, best known as the founder and lead singer of English rock band The Who. He has maintained a musical career as a solo artist and has also worked in the film industry, acting in films, theatre and television roles and also producing films. In 2008 he was ranked number 61 on Rolling Stone magazine's list of the 100 greatest singers of all time.