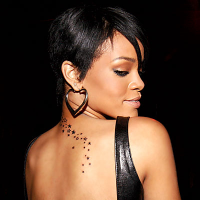 In the early beginnings of her career, Rihanna was described by New York Times as “a cookie-cutter teen queen”. She was the cute, sweet and yet sexy girl from a small city of Barbados who in just one month became an international star. But that was seven years ago. Now, Rihanna is a troubled diva, more famous than ever, not only for her music, but for her personal life as well.
Rihanna then and now

In 2005, her debut single, “Pon de Replay“, peaked at number two on both the Billboard Hot 100 and the UK Singles Chart, turning into a global hit and peaking within the top ten across fifteen countries. The girl who used to sell clothes on the streets of her native town with her drunken father was now a rising star. Jay-Z and his label, Def Jam Records, gave her a six-album contract deal and took charge of Rihanna’s future.

She released six highly successful albums: Music of the Sun (2005), A Girl Like Me (2006), Good Girl Gone Bad (2007), Rated R (2009), Loud (2010) and Talk That Talk (2011) and each marked a stage of transformation in her evolution as singer and woman. The first album was created to show to the world where she comes from, what her background was, and her unique and happy personality. The second album was even more personal, revealing the real Rihanna at that stage, who she is and who she wants to be, while the 2007’s album marks a shift in the smooth evolution of the singer. She becomes rebellious, misunderstood, and she is no longer the Barbadian beauty who so innocently sang “SOS”. Rated R reveals a more mature Rihanna, while Loud is Rihanna’s shout on her sexuality and desire to shock.

She has received 196 awards from 447 nominations in Pop, Soul, R&B, Rock, and Rap categories at the AMAs, BET Awards, Billboard Music Awards, Brit Awards, the Echos, the Grammys, the MOBOs, People’s Choice Awards, MTV’s Music and Video Awards and so on.

As for her personal life, Rihanna wants to keep it private. However, she cannot escape the paparazzi, which are always there in the shadow, tailing her. Thus, it’s not once that Rihanna made the headlines of magazines not thanks to her music, but due to her shocking appearances, like that of running topless on a humorless farmer’s property, and to alcohol problems. She was photographed dozens of time with a bottle of alcohol in her hand, dead drunk in nightclubs and even leaving for the hospital after a party.

It seems that her friends are no longer keeping their mouths closed and revealed to the press that the Barbadian star really has serious issues not only with alcohol, but with drugs too. Not even fame and money couldn’t change her past, and Rihanna is now acting more and more like her father, who was an alcoholic and a drug addict his entire life, seriously affecting her childhood.
She always seems very tired. At the premiere of Battleship, the movie Rihanna is currently promoting, she disappointed her fans with her look and attitude, and after the Metropolitan Gala this month, she ended up in the emergency room. Her best friend, singer Katy Perry said she is afraid for her friend’s life and that she might end up like Amy Winehouse or Whitney Houston.