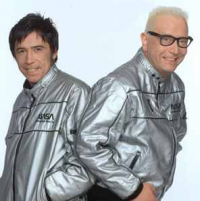 Righeira is an Italo disco duo from Turin, Italy. The group was founded in 1981 by Stefano Rota and Stefano Righi. They became famous in continental Europe for their single "Vamos A La Playa" (Let's Go To The Beach), composed together with Carmelo and Michelangelo La Bionda and released in 1983. Differing from the consensus that the song has none or little depth, the song's content is rather serious and addresses the danger of atomic bombs and the problem of beach pollution. The track reached #53 in the UK Singles Chart.