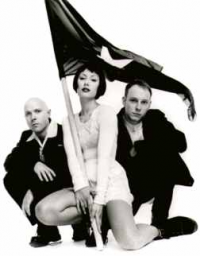 Republica are an English alternative rock band formed in 1994. The height of their popularity spanned from 1996 to 1999. The current line-up consists of Samantha Sprackling aka Saffron (vocals), Tim Dorney (keyboards), Johnny Male (guitar), Conor Lawrence (drums).
The Republica sound was described by the band as "techno-pop punk rock". The band went on hiatus in 2001 and reunited in 2008. Republica are best known for their hit single Ready to Go.