Rage Against the Machine 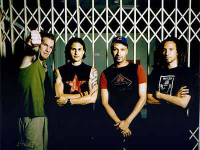 The band's founding members were vocalist Zack de la Rocha and guitarist Tom Morello. They owed their name to a song, "Rage Against the Machine", by de la Rocha's former group, Inside Out.

Shortly after forming, Rage recorded twelve songs, and distributed it themselves as cassette tapes. Several record labels expressed interest in the group, which signed with Epic Records. Some critics (such as writers for Melody Maker) criticised the band for voicing loud commitment to left-wing causes whilst being signed to Epic, a subsidiary of Sony Records, at a time when many alternative labels were struggling. Some critics felt that the band's anarchism was insincere.

Tom Morello provided this rebuttal to that criticism:

A lot of labels contacted us, and lots of them just didn't seem to understand what we wanted to do. They kept talking about the message of the music as a gimmick. They were interested in us just because there was a buzz... They saw us as the latest local rock band to be hyped. But Epic agreed to everything we asked--and they've followed through... we never saw a conflict as long as we maintained creative control. When you live in a capitalistic society, the currency of the dissemination of information goes through capitalistic channels. Would Noam Chomsky object to his works being sold at Barnes & Noble? No, because that's where people buy their books. We're not interested in preaching to just the converted. It's great to play abandoned squats run by anarchists, but it's also great to be able to reach people with a revolutionary message, people from Granada Hills to Stuttgart.

Their self-titled debut album "Rage Against the Machine" was released in late 1992, and at a Lollapalooza appearance in 1993 in Philadelphia, the band stood still on stage for a full 15 minutes, completely naked, with duct-taped mouths and their guitars feeding back through the amplifiers. The letters "PMRC" were displayed across their chests, in protest against what they considered censorship by the Parents Music Resource Center.

Evil Empire (1996) and The Battle of Los Angeles (1999) followed. Though unfavorably reviewed the Evil Empire album featured "Bulls on Parade", one of their signature songs, which, on April 13, 1996, the band performed on Saturday Night Live, hanging inverted American flags from their amps in protest of Steve Forbes, who was the guest that night. However, the stage crew took the flags off, and cut them down to only one song instead of the normal two. The Battle of Los Angeles received more positive reviews and was generally seen as a return to form.

In 1999, the band's track "Wake Up" was used for the closing credits of the highly influential popular science-fiction movie, The Matrix. Another one of their songs, "Calm Like A Bomb" was featured in the sequel, The Matrix Reloaded.

Between the release of The Battle of Los Angeles and the release of Renegades, de la Rocha left the group. In light of his leaving the band, he released the following statement on October 18, 2000:

I feel that it is now necessary to leave Rage because our decision-making process has completely failed. It is no longer meeting the aspirations of all four of us collectively as a band, and from my perspective, has undermined our artistic and political ideal. I am extremely proud of our work, both as activists and musicians, as well as indebted and grateful to every person who has expressed solidarity and shared this incredible experience with us.

One of Rage Against the Machine's most influential moments came with the filming of a music video for "Sleep Now in the Fire" on January 26th, 2000. Directed by Michael Moore, the video was shot outside the New York Stock Exchange (NYSE) on Wall Street, in New York. The band and Moore clashed with security and police, and the Exchange locked it's doors in the middle of the trading day.

Zack de la Rocha is reportedly working on new material in the hip-hop arena; the remaining members of the band teamed up with ex-Soundgarden singer Chris Cornell and formed Audioslave. The first Audioslave single, "Cochise", was released in early November 2002, and the first album followed to mainly positive reviews, while their second album Out of Exile debuted on the #1 position on the billboard charts in 2005.

According to a Spin magazine interview with de la Rocha, he has recorded several tracks with various artists, among them Reprazent and DJ Shadow. In 2003 a song called "March of Death" that he recorded with DJ Shadow was released in protest of the war on Iraq. As of September 2005, de la Rocha's solo debut album is scheduled to be released on December 31, 2005.

In September 2004, de la Rocha released a song called "We Want It All" produced by Trent Reznor on the Songs and Artists That Inspired Fahrenheit 9/11 soundtrack. Tom Morello, credited as "The Nightwatchman," also contributed a song, "No One Left," to the soundtrack.

2003 - Live at the Grand Olympic Auditorium,

Rage Against the Machine 1997- This DVD contains footage of concerts in Irvine, CA, at the Rock Am Ring Festival 1996, and at the Pink Pop Festival 1994. It also features music videos for five Rage songs from their first two albums. The DVD also contains a poem by Zack de la Rocha (Memory of the Dead) and a cover song, "The Ghost of Tom Joad".

Revolution USA 1999- This unauthorized DVD contians the biographies of the band members and interviews with Tom Morello and music journalists, but does not contain any live video clips.

The Battle of Mexico City 2000- Because of their support of the Zapatista Movement and de la Rocha's Mexican heritage, Rage Against the Machine had a strong fan base in Mexico. This concert was Rage's first in Mexico, and the connection between the band and the fans is apparent. This DVD contains songs from Rage's first three albums and a cover, "Zapata's Blood".

Live at the Grand Olympic Auditorium 2003- This DVD is the last recorded performance of Rage in the Grand Olympic Auditorium in Los Angeles, CA on September 13, 2000. The 13th track on the DVD contains the bands cover of the Cypress Hill song "How Could I Just Kill A Man" (which also appears on the band's cover album "Renegades") and features long-time friend B-Real of Cypress Hill as a guest on the performance. The DVD also contains the videos to the songs "Bombtrack" and "How I Could Just Kill A Man", footage from the band's free Democratic National Convention concert on August 14th, 2000, as well as two bonus concert performances of "People of the Sun" and "Know Your Enemy".