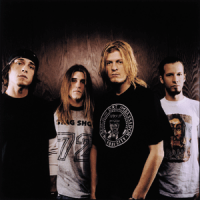 Puddle of Mudd (often stylized as PUDDLE OF MU??) is an American rock band from Kansas City, Missouri. To date the band has sold over seven million albums, and have had a string of No. 1 mainstream rock singles in the United States. Their major-label debut Come Clean has sold over five million copies. They have released two independent and four major albums, with their latest being Volume 4: Songs in the Key of Love & Hate in December 2009, and their latest compilation album being re:(disc)overed, released in August 2011.