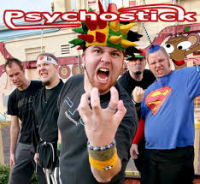 Psychostick is a Heavy Metal band from Tempe, Arizona, known for their silly image and usage of humor in their songs and lyrics. Their style is referred to by themselves and some online album review sites as "humorcore". To date they have released three albums nationally. Their debut album, We Couldn't Think of a Title, was released on September 12, 2006. Their second album, Sandwich, was released on May 5, 2009, and their most recent, titled Space Vampires VS Zombie Dinosaurs in 3D, was released August 16, 2011. They began touring nationally in July 2006, and have toured with Mushroomhead, Look What I Did, Powerglove, Bobaflex, and have played with many national bands, including Three Days Grace, Army of Anyone, Sick Puppies, Anew Revolution, The Exies, Smile Empty Soul, as well as many others.