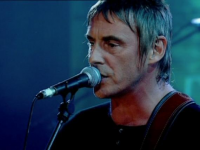 Paul Weller (born John William Weller May 25, 1958 in Woking, Surrey, England, UK) is a British singer / songwriter who has been one of the biggest influences on British popular music for more than a quarter of a century, fronting two highly successful bands, The Jam and The Style Council. In the UK, he is recognised as something of a national institution, yet because much of his songwriting is rooted in British culture, he has remained essentially a national rather than an international star.

Weller first burst onto the national music scene in 1977 with his first band, The Jam, which he had formed four years earlier as a teenager in Woking with his friends Rick Buckler (drums) and Bruce Foxton (bass). Weller himself took lead vocal duties and was a talented lead guitarist.

1977 was the year after the first wave of punk bands such as The Sex Pistols, The Buzzcocks and The Clash had arrived in the public eye. Although The Jam's music had much of the fire and the passion of those bands, in terms of song writing ability and lyrical content, The Jam were more in the mould of the so-called 'new wave' bands who came later on. Also, being just outside of London rather than in it, they were never really part of the tightly-knit and resentful punk clique, perhaps inspiring Weller's lines in The Jam's very first single In The City: "In the city there's a thousand things I want to say to you, but every time I approach you, you make me look a fool."

Nonetheless, The Clash were suitably impressed by The Jam to take them along as the support act on their White Riot tour of 1977. Politically, Weller was inspired by the left-wing stance of the senior band's Joe Strummer and Mick Jones. The Jam went on to be far more successful, at least in terms of the singles charts, than The Clash in the UK.

In The City took The Jam into the Top 40 for the first time in May 1977, although it would take another two years and eight singles before they were sufficiently engrained in the British national consciousness for The Eton Rifles to break the Top 10, hitting the No. 3 spot in November 1979.

From then on their blend of pop tunes and politically-aware lyrics made them hugely popular, and in 1980 they hit No. 1 for the first time with what many believe to be the 'definitive' Paul Weller song - Going Underground, which was to become in effect the band's signature tune. A popular story has it that Going Underground hitting the charts at all was in fact an accident - allegedly, it was supposed to be only the B-side to Dreams of Children, a less-remembered song, but a mistake at a French pressing plant meant both songs were given 'A' status on the label so they had to be released as a double A-side. Whether this is true or apocryphal is unknown, but whatever the case, after Going Underground, The Jam - and Weller in particular - were UK superstars.

Weller was strongly influenced by 1960s bands such as The Kinks and The Who, both great favourites of his whose presence can be felt in much of The Jam's material. However, that did not mean that he was averse to finding inspiration in the works of many other artists: the Jam's second No. 1 single, Start! borrows heavily from The Beatles' Taxman, for example. The group's third No. 1, Town Called Malice, which has more recently found renewed fame on the Billy Elliot soundtrack, has a driving bass line very reminiscent of The Supremes' You Can't Hurry Love.

In the early 1980s, The Jam were possibly the biggest band in Britain. They even had one single, That's Entertainment, that reached No. 21 in the UK charts despite not even being released in that country - it got there purely on the strength of the huge number of people buying import sales of the German single release. Weller, however, was eager to explore other musical avenues he felt he could not go down with The Jam. Later Jam songs such as The Bitterest Pill (I Ever Had To Swallow) - often described by critics as "a Style Council song pretending to be a Jam song" - showed that he longed to write in a perhaps more melodic, soulful style. He felt had taken The Jam as far as he could and was eager to move on.

Thus in late 1982, Weller shocked fans and the press - as well as his bandmates Buckler and Foxton - by announcing that The Jam were to disband at the end of the year. Their final single, Beat Surrender, became their fourth chart topper, going straight in at No. 1 in its first week, which was still very rare at the time, and their farewell concerts at Wembley Arena were multiple sell-outs.

At the beginning of 1983, The Jam were no more and the press and public wondered what was next for Weller. The answer emerged in the form of a collaboration with his friend, keyboard player Mick Talbot, to form a new group called The Style Council. A very different band to The Jam, the Style Council played a whole range of varying musical styles, from outright pop to jazz, soul and the occasional ballad. Weller and Style Council back-up vocalist Dee C. Lee (ex-Wham! back-up singer) formed a romantic relationship during this period and later married.

However, the Style Council were not completely untouched by the spirit of The Jam - indeed, one of their early singles A Solid Bond In Your Heart was originally written and recorded during The Jam era, and this earlier version later turned up on that band's Extras compilation. And as The Bitterest Pill (I Ever Had to Swallow) is sometimes labelled as a Style Council song pretending to be a Jam song, so 1985's Walls Come Tumbling Down is often compared to a Jam song, hiding under Style Council colours.

The Style Council's 1988 album Confessions of a Pop Group.Although the Style Council were never as successful chart-wise as The Jam had been - they never had a No. 1 single, for instance - that didn't stop the mid-1980s from being possibly the peak of Weller's high profile in the UK. He appeared on 1984's famous Band Aid record Do They Know It's Christmas? (although his major contribution was probably to mime the unavailable Bono's part on the Top of the Pops performance of the song) and the Style Council were the second act on in the British half of Live Aid at Wembley Stadium in 1985.

Despite this success at home, the Style Council were little more successful internationally than The Jam had been, with My Ever Changing Moods providing them with their one and only single to ever make the US Billboard Chart's Top 40. As the 1980s wore on, the Style Council's popularity in the UK itself began to slide, with none of their singles even reaching the Top 20 any more. For the first time in Paul Weller's career, he found himself somewhat in the shade, and the death-knell of The Style Council was sounded in 1989 when their record company refused to even release their fifth and final album, Modernism - a New Decade, although this did eventually have a limited vinyl run and appeared on The Complete Adventures of the Style Council, retrospective box set.

In the early 1990s, Weller disbanded the Council and went quiet for a few years, before returning to prominence as one of the major influences behind the mid-1990s 'Britpop' movement that gave rise to such bands as Oasis and Blur, both of whom were heavily influenced by The Jam in particular. Weller even appeared as a guest guitarist and backing vocalist on "Champagne Supernova" of Oasis's seminal 1995 album (What's The Story) Morning Glory?, perhaps the defining moment of Britpop . In particular, Weller was an important influence in the development of Ocean Colour Scene, and members of that band, particularly guitarist Steve Cradock, often played in Weller's backing band.

However, his role was not purely that of a mere influence: his own 1995 album Stanley Road (allegedly named after the street in Woking where he had grown up, although there is no Stanley Road in or near to Woking as of 2005) took him back to the top of the British charts, and went on to become the best selling album of his entire career. It marked a return to the more guitar-based style of his earlier days, albeit with a more grown-up mature edge than the sheer adrenaline rush The Jam had provided. The album's major single, The Changingman, was also a big hit, taking Weller back into the Top 10 of the singles charts. (Weller's detractors, however, noted that the song's descending guitar riff bore a strong resemblance to the one used on the Electric Light Orchestra's debut single, 10538 Overture).

His influence over the 1990s generation of British guitar bands, coupled with his love of 1960s Mod-era music, had earned him the affectionate nickname 'The Modfather', and the late 1990s saw him cement his position as one of Britain's major musical figures. In 1996 he collaborated with Oasis's guitarist / songwriter Noel Gallagher and none other than Paul McCartney to form the 'super group' Smokin' Mojo Filters, releasing a version of The Beatles' hit Come Together. New Jam and Style Council 'best of' albums took his earlier career back into the charts, and his own solo 'best of' collection Modern Classics was a substantial success in 1998.

The year 2000 saw the release of his fifth solo studio album and seventh solo effort overall (as well as the Modern Classics compilation, there had also been the 1994 live album Live Wood), called Heliocentric. There were rumours at the time that this was to be his final studio effort, but these proved unfounded when he released the No. 1 hit album Illumination in September 2002, preceded by yet another top ten hit single It's Written in the Stars. Between these two albums he had also released a second successful live album, 2001's Days of Speed, on which he performed acoustic versions of some of his best-known songs not just from his solo career but from The Jam and Style Council back catalogues as well.

His most recent album is Studio 150, a collection of cover versions of songs including a cover of the classic Bob Dylan song, "All Along The Watchtower".

Proving that interest still remained in his seminal days of the 1970s and 80s, no less than three of his songs - two Style Council numbers and a Jam song - turned up on the soundtrack of 2001's hit British movie Billy Elliot, bringing him a whole new generation of fans to discover his music.

Evidence of his continued popularity was provided by a poll run by British national radio station Virgin Radio in December 2002 to find the Top 100 British Artists of all time. More than 25,000 listeners voted, and in the final results revealed on 31st December, The Style Council came in at No. 97, Weller as a solo artist at No. 21 and The Jam at No. 5 - ahead of such acts as The Rolling Stones, Led Zeppelin, The Clash and Weller's own heroes such as The Who and The Kinks.