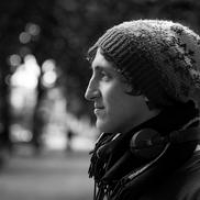 Parra for Cuva is Nicolas Demuth, and for some of his work he is joined by the singer Anna Naklab, who enriches the electronic sounds with her voice. Parra for Cuva creates a uniquely emotional sound experience, which nevertheless contains a certain lightness.

Nicolas Demuth was born in Cologne in 1991 and studied audio design at the University of Popular Arts in Berlin. He lives and works in Berlin and has produced electronic music under the name Parra for Cuva for two years now. Parra for Cuva has completed training in classical and jazz piano, and thus comes from a background in instrumental music. The piano continues to be
an important aspect of his productions.

He entered electronic music primarily through playing the piano (which he has been doing for 13 years now!). A few years ago he wanted to record his piano pieces and so bought a cheap DAW (digital audio workstation), which happened to include a couple of hip-hop samples. When he started to mix these beats with his piano pieces, he couldn't stop and continued to educate himself.