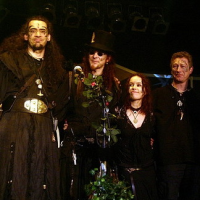 Omnia performs mainly their own compositions, but it also sets to music poetry and play scenes, like the Raven by E. A. Poe or the Witch scene from Shakespeare's "Macbeth".

The band draws from various musical traditions, mainly from Ireland, Cornwall, Brittany and Afghanistan. They sing in English, Irish, Breton, Finnish, German, Latin, Welsh and Hindi and use only acoustic instruments from various cultures.

Omnia has performed at numeral festivals in Austria, Belgium, Germany, Hungary, Luxembourg and the Netherlands.