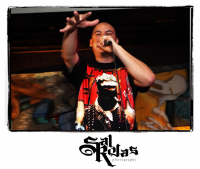 [BrownPride.com] - Tell us about yourself as an emcee for those that don't know about Olmeca's Musik?

[OLMECA] - I was born in El Sereno, grew up Mexico and in neighborhoods in L.A. like South Central, Rosemead and East L.A.

When I was 15, my family moved to North Carolina (For those of you that don’t know this is what undocumented families do when there are no jobs. We migrate and go wherever there’s a need for cheap labor). I took some mix-tapes given by homies of mine from Rosemead. It had some “Wake Up” and “Seditious Beats” radio shows on it, Wu-Tang Clan, Styles of Beyond and others were on those tapes. I started listening to Mack 10, Ice Cube, Dr. Dre and others that were on the radio and television at the time. Their lyrics reminded me of home. When I returned to L.A. Rosemead, I looked for underground spots and soon enough came across “Project Blowed.” I found myself going every Thursday and paying my dues. I started working for their magazine and wrote reviews. I did an interview with a group called “Acid Reign.” We showed each other our music. Eventually I was invited to do some shows with them and before I knew it, I was an official member.

I started writing in Spanish. To my surprise, a lot of folks were into it, “That ish was dope; I wish I knew what you were saying!” People liked the styles and at Project Blowed and in the L.A. underground, that’s what mattered most!

I looked for a space where I could write more in Spanish and write music that was more culturally and politically based. I found Slowrider. This got me into the Xicano music scene of East Los Angeles, from there on I have existed in both worlds and now I’m expanding by making my own support base throughout the United States.

As an emcee I don’t limit myself to “scenes.” I do my thing; I often organize my own shows and spread the word. That’s one of the reasons Hip-Hop heads, punk rockers, anarchists, teachers, professors, knuckleheads, organizers and everything in between support my music.

[BrownPride.com] - On a more personally level what does your musik mean to you?

[OLMECA] - My music means the world to me. I started making musik when I was 15 years old. When I was a young one, I went to gigs with my pops who was a musician (a drummer for cumbia groups). My family left to seek better opportunities and music and my community replaced my family. Literally! See my family and I have been through the toughest times. We crossed the border together, moved around month to month from place to place, lived in other people’s homes, slept in the back of trucks. I grew up with a desire to make things better not only for my family but for homies and their families without dealing or giving into the same oppressive system.

My life purpose is to help inspire and bring about real change. I think for people of color, we have to tap into our culture and traditions. For La Raza, I believe that if we can learn our history, we’ll see how we are indigenous peoples of a raped continent. We can then get closer to the prophecy of the Eagle and the Condor, musik is my vehicle for this!

[BrownPride.com] - What are some influences we can find in your musik and lyrics?

[OLMECA] - Like many people out there, being brown in the United States means you grow up in two cultures. So, musically everything my family grew up on, I also grew up on + pop culture and Hip-Hop. History and stories of resistance motivate me greatly. The Zapatista Movement is part of my life and I have a life commitment to them. My own experiences as an artist in rebellion/organizer/revolutionary help me stay grounded and so in my music; I contextualize many of those experiences.

[OLMECA] - Yeah, “La Contra Cultura / Counter Culture” is the story and the thoughts of a kid who grows up poor and then, not by choice but by circumstance, becomes a rebel and a fighter against Imperialism and for humanity and dignity. The idea behind it is to show that we are no different. I want people to carefully listen and see how our stories are the same. With “La Contra Cultura”, I want to help grow our political and cultural work and really come together “pa’ darle duro al sistema!”

I’ve always been considered a political artist. I don’t disagree with that, but I would consider my music much more holistic. It is depicting the reality of a brown person growing up in the hood not as a victim, but as a person who is figuring out the plot of the system, fighting against and creating alternatives. In other words, America, don’t feel sorry for us. We can take care of ourselves… the question is “are you down to roll with us or not!” That’s “La Contra Cultura.”

[BrownPride.com] - How does it differ from your debut album "Semillas Rebeldes"?

[OLMECA] - “Semillas Rebeldes” was a dope album to me. I wrote most of it and recorded it while I was in Chiapas, Mexico and in Zapatista communities for almost a year. “Semillas Rebeldes” describes the way of life the Zapatistas live by, Autonomy! Semillas is influenced by the sounds I heard in Chiapas and carries that mood. “La Contra Cultura”, sounds like it was made in the concrete jungle. In both of my albums the mood of the music changes, being a revolutionary doesn’t mean that you’re always mad. Also don’t mistake urgency with anger. We are humans; we are part of this reality. We come with many layers. I don’t shy away from them; I celebrate them. So, in both albums you hear fast and slow songs. “La Contra Cultura” is simply more personal and direct.

[BrownPride.com] - When you perform on stage you like to perform with a live band when you are able to?

[OLMECA] Performing with a DJ and a microphone is dope and it has its place, but if I was given the option I would always go with the live band. I’m an emcee but also a musician and producer. To me, rocking a show with a band feels more complete. Every show has different people and different energies. With a live band, you can sway the moods or go along with the energy people are giving you much easier than with a playback. One song can go from 3:30 minutes to 10 minutes, you can mix the songs, come back to one later, flip it and freestyle the possibilities are endless. The other thing is that mainstream America still doesn’t view Hip-Hop as a credible music form. I appreciate it when doubters give respect after the shows.

[BrownPride.com] - You travel a lot in support of your musik?

[OLMECA] - I’ve been blessed to go to Florida, Illinois, Wisconsin, Northern California, Arizona, Mexico and Canada. I’ve done shows with the legendary Bahamadia, Saul Williams, Dilated People’s and other dope artists. I’ve been very fortunate to have constant support. In my opinion, my loyalty comes from the relationship I build with them during the shows. It’s a crazy variety of people that support. There are the obvious street heads and activists circles. There are college professors and high school teachers. A lot of folks who are not normally into hip-hop, but appreciate the message are constantly there also. It’s been a blessing and I am very thankful for that support.

[BrownPride.com] - What's been your favorite place to visit and why?

[OLMECA] - One of my favorite places to visit has been the Midwest. Chicago, Illinois has been showing support for over three years now. The people are on point with their organizing. They have their own scene and network.

Madison, Wisconsin (yeah, I said it right) the college party capital of the U.S. has shown support too. Quick story, I’m walking down the “hall of shame” (where all the fraternities and sororities are at). Three loud white folks see me coming and they get quiet and they part like the red sea and I start laughing. I’m not laughing at them, I’m laughing at the girls tanning on the front yard while listening to The Game, some funny shit!

[OLMECA] - We’ll be working on music videos for the singles “Pieces of Me” and “Counter Culture” in support of the album. I’m also helping produce other artists, working on a compilation album on immigration, a collaborative CD of Son Jarocho (traditional musical style of Veracruz, Mexico) and Hip-Hop production, and a book/memoir that compliments “La Contra Cultura” album.

Beyond that, I’ll be touring again and organizing some events in the greater Los Angeles area.

[BrownPride.com] - Where can we pick up copies of your albums and all the latest information on your future projects?

[OLMECA] - We can get all the latest information pertaining to me at www.olmecamusik.com, myspace/olmeca, and on Facebook.