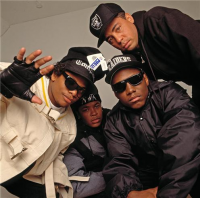 N.W.A (an initialism for Niggaz Wit Attitudes) was an American hip hop group from Compton, California, widely considered one of the seminal acts of the gangsta rap and west coast hip hop sub-genres, sometimes credited as the most important group in the history of rap music. Active from 1986 to 1991, the rap group endured controversy due to the explicit lyrics that many considered to be disrespectful to women, and glorifying drugs and crime. The group was subsequently banned from many mainstream American radio stations. In spite of this, the group has sold over 10 million units in the United States alone.