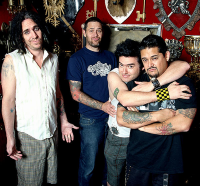 NOFX's first release was a demo from 1983, produced by Germs drummer Don Bolles, which did not sell any copies. They released their self-titled debut EP NOFX on Mystic Records in 1985, which later resurfaced in 1992 on the Maximum Rocknroll CD.

For a year, Erik Sandin left the band and was replaced by Scott Sellers, then Scott Aldahl. Dave Allen was with the group for about 4 months until he died in a car accident. In 1986 the band released "So What if We're on Mystic!" Dave Casillas joined the band on second guitar in 1987 and was featured on the EP The P.M.R.C. Can Suck on This!, a title attacking the PMRC's call for censorship of music. The original cover was an edited S&M photo, but when re-released changed to a photo of Eric Melvin.

Dave then left the band and was replaced by Steve Kidwiller (also known as Steve the Caucasian). They recorded Liberal Animation in 1988 with Brett Gurewitz from Bad Religion. The album was re-released in 1991 on Gurewitz's label Epitaph Records. NOFX had signed to Epitaph by 1989, releasing their second album S&M Airlines. 1990 saw the release of Ribbed in which the band solidified their sound.

By 1991, there had been a lot of changes to the band. However, the original three members had reunited and Aaron Abeyta (aka El Hefe) joined to round out the present line-up. White Trash, Two Heebs and a Bean was released in 1992 which originally had the title "White Trash, Two Kikes, and a Spic." The original title was changed due to the fact that "[...] my mom had heard about it and she told my grandpa and my grandma became very upset and I just couldn?t live with that" (Eric Melvin.)

It was not until the 1994 release of Punk in Drublic that the band had a popular breakthrough. The album went gold. In the same year pop-punk entered the mainstream with The Offspring's Smash and Green Day's Dookie. NOFX never matched the popularity of the other bands, but are among those who achieved some popular acclaim in the mid-1990s and still kept their hardcore fanbase who reviled other bands that were perceived as sell-outs.

Since 1994, they have consented to very few interviews and have made only few music videos. However, Fat Mike once did an interview for Guitar World in 2003 giving his opinion on the pop punk bands rising at that time. Fat Mike was also interviewed by Australian radio station Triple J in 2004. Their official website features a Q&A section, where they answer questions sent in by fans. Updates have not occurred to the Q&A section, but the archives can still be browsed. NOFX have continued to release independent records throughout their career. An extensive, nearly 20 page interview was done for a 2003 issue of AMP Magazine. Recently Fat Mike wanted to do another interview and he chose the punk magazine Big Cheese to cover him. The interview is about S&M, his wife, punk pop bands and NOFX' music. The band released The Decline, a fiery and pessimistic social commentary, in 1999. Having a duration of 18 minutes and 23 seconds it is nearly the longest punk song to date, second only to "Yes Sir, I Will" by Crass, which spans more than 22 minutes.

In 2003, NOFX released a CD entitled War on Errorism, an album of snarky political songs. It became the start of their anti-Bush campaign and a rallying point for liberal punks. Since the CD's release, Fat Mike organized the website Punkvoter.com, compiled two chart topping Rock Against Bush CDs on the Fat Wreck Chords label, and kicked off a Rock Against Bush nationwide tour. Their emergence on the political scene has not faded after the election.

The band has also released many EPs (Fuck the Kids, The Longest Line) on Fat Mike's own label Fat Wreck Chords. In February of 2005 they launched the NOFX 7" of the Month Club, a subscription-based service which saw the release of one new EP about monthly from February 2005 to March 2006 (a total of 12 releases). The cover art for these 7-inches were chosen from fan-submitted entries, from which the band selected one submission for each month's record. Billed as "A year long documentation of their songwriting process," the first 3000 subscribers to the club received all of their records on coloured vinyl.

On March 14, 2006, an EP entitled Never Trust a Hippy was released, followed on April 18 by an album Wolves in Wolves' Clothing.

On September 12, 2006, EA Sports NHL07 was released and features, Wolves in Wolves' Clothing on its soundtrack.